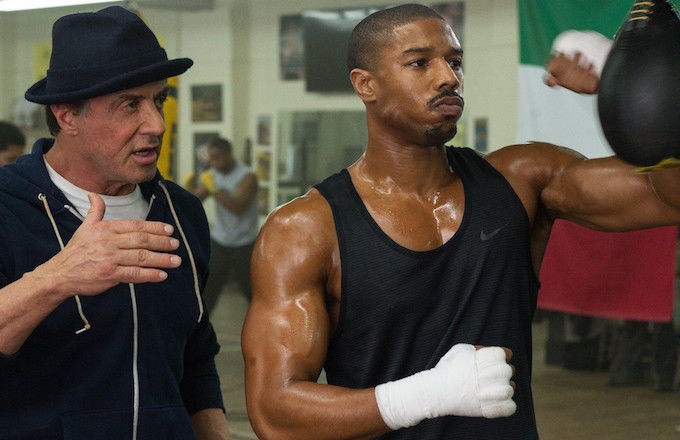 The original Rocky was about an underdog, written by an underdog (a pre-fame Sylvester Stallone had a little over $100 in the bank and a pregnant wife at the time), and became an unlikely Best Picture winner in 1977. Above that, an underdog city was its calculated setting. Despite its ties to the United States’ foundation, Philadelphia has become something of an overlooked elite city. It doesn’t offer the high-risk, high-reward opportunities of New York and Los Angeles, nor does it carry the glamorous sheen of an Atlanta or Miami. It’s somewhere in the middle, completely outshined. Rocky Balboa, whose entire existence has been an uphill battle, has been a depiction of the city’s attitude for four decades. He’s every bit the Spirit of Philadelphia as the boat at Penn’s Landing. In Creed, more spin-off than official Rocky sequel, this mindset is channeled through a new vessel.

Michael B. Jordan plays Adonis Johnson Creed, the bastard son of Rocky’s former rival turned friend, Apollo Creed. Searching for his identity, the younger Creed ventures to Philly to goad a reluctant Rocky into refining how he does what he’s spent his entire life doing: fighting. As Adonis grows closer to the missing link to his past, Rocky becomes more than the younger man’s trainer—he becomes his guide. At this stage of the Rocky franchise, its star has slid into the Mickey role, passing the torch he once ran with to Adonis. With that torch comes a singular reverence to the city of Philadelphia.

The 72 steps positioned in front of the Philadelphia Museum of Art are known as the “Rocky Steps,” and the statue of Rocky built for Rocky lll rests near their base. The franchise has made an absurd amount of money, so while its popularity isn’t germane to Philly, it’s undeniable that Rocky’s identity is analogous to the city’s.

Even though Philly has experienced the gentrification overhaul seen in other major cities, its “never back down” attitude endures. You can hear the urgency in the voices of Philly-based rappers, from Black Thought’s gravelly braggadocio to Meek Mill’s conviction and crescendo. Philly loves and respects fighters, even if they aren’t boxers. That’s why Allen Iverson (who, pound-for-pound, is the embodiment of Meek’s “Little nigga but I’m lionhearted” line) is such an iconic figure in the city. What’s more, the pro teams—which, until 2008, suffered a 25-year championship drought—are often subject to ridicule. The fans are largely detested due to infamous incidents. (Disclosure: as a Philly sports fan, I believe the blanket criticism is unfair. Every city has insufferable fans.) They’ve been spurned just as Rocky and Adonis have been. During an appearance on Inside the NBA last week, Stallone, who has become somewhat of an adopted son in Philly, offered his take on the city’s mentality.

“It’s really unique because, at the birth of this nation, the city was supposed to be the city. Then things happened,” Stallone said. “Even though they signed the Declaration of Independence and everything else, everything went to New York, a lot of things went to Massachusetts, and Philadelphia sort of just stayed there. It was sort of left behind, and I think [Philadelphians have] a little chip on their shoulder. They band together and take their brotherhood kind of serious because they feel a little slighted, I think. I really do. That’s why I believe Philadelphia fighters are so aggressive, and that Joe Frazier totally typified what that city is all about.”

Creed transfers this embedded aggression and resolve, seen in Philly fighters like Matthew Saad Muhammad, Bernard Hopkins (who, at 50, is still active), and Danny García​, from Rocky to Adonis. It’s a natural process, because Adonis has more in common with Rocky—and Philly—than his father. Adonis, a former juvenile delinquent, lives a life similar to that of Rocky in the series’ first installment: working man by day, amateur fighter at every other opportunity. Rocky was called a “bum” by everyone from the spectators at his amateur fights to Mickey, his eventual trainer. Adonis is a fatherless child who spent a significant portion of his life in the system before being plucked out by Creed’s widow. They’re both outcasts and instinctive fighters. Rocky fought for respect; Adonis fights to live up to his last name.

Rocky has been a pop culture representation of Philly’s grit for nearly 40 years, and Creed pushes that tenacity into Adonis—a new adopted son. He has the same chip on his shoulder that Rocky had; the same one that the city has. He isn’t exactly the millennial answer to Rocky, but Creed finds the saga’s namesake taking a backseat to Adonis, becoming an essence that Adonis absorbs en route to inhabiting his position as the diamond in the rough. Like Stallone and Joe Frazier, he may not be a Philly native, but it helped make him who he is.

The training montage has become a staple of the Rocky series, and Rocky ll features the hero joined by a phalanx as he runs through the streets of Philadelphia. It’s overt in conveying that he’s leading the city. Unsurprisingly, Creed includes a similar moment, with Adonis followed by kids popping wheelies on the ATVs and dirt bikes that are staples in Philly. (Refer to one of Meek’s videos, or take note during your next visit.) He’s carrying his father’s legacy—and Rocky’s—but he’s also carrying the city’s.