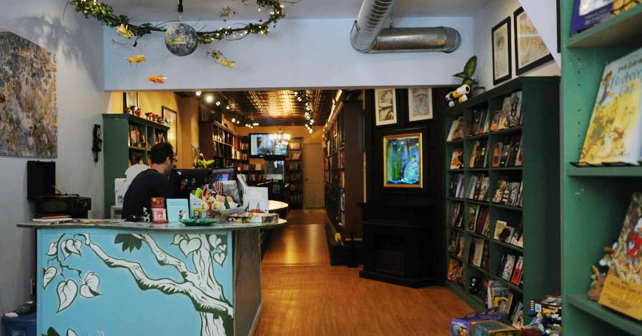 Fast becoming known for its publishing program, the Philadelphia comics retailer Locust Moon has inked an innovative deal with the Philadelphia Museum of Art to produce a comics anthology based on the museum’s upcoming exhibition, Wrath of the Gods: Masterpieces by Rubens, Michaelangelo and Titian.

The book, Prometheus Eternal, features stories based on Rubens’s 17th century painting Prometheus Bound, and will be released as part of the Locust Moon Press fall line of books.

Prometheus Eternal will feature such acclaimed comics artists as Bill Sienkiewicz, Paul Pope, Farel Dalrymple, Yuko Shimizu, Andrea Tsurumi, and will also be included in the museum exhibition itself, alongside works by the featured master artists, said Josh O’Neill, co-founder of the Locust Moon comics shop and publisher of its small press imprint Locust Moon Press.

The book was done in collaboration with Christopher Atkins, curator of European painting at the Philadelphia Museum of Art, in an effort “to find a new way to promote the show and connect to a broader audience,” O’Neill said. “The plan is to do more books connected to other paintings and exhibitions. This is the beginning of a beautiful friendship between Locust Moon and the Philadelphia Museum of Art.”

Locust Moon is a 1,800 square foot comics shop, gallery and event space with a fast growing publishing program. In 2014 the store raised over $150,000 on Kickstarter to publish Little Nemo: Dream Another Dream, a much-lauded $125 oversized hardcover tribute to comics artist Winsor McCay that won two Eisner awards for excellence at this year’s San Diego Comic-Con International.

Prometheus Eternal is among four books announced as part of the Locust Moon Press fall list. The press is also releasing Little Nemo’s Big New Dreams, an abridged version of its award-winning Little Nemo tribute book, adapted for children in collaboration with Toon Books (it will be distributed both by Diamond and Toon Books’s distributor Consortium); Quarter Moon: Impractical Cats, the latest release of the press’ quarterly anthology, this time featuring cat comics by an all-star line up of artists that includes Ron Wimberly and Dean Haspiel; and Shaman, a debut graphic novel by the creative team of Ben Kahn and Bruno Hidalgo, described by O’Neill as “a gleeful dismemberment of superhero tropes.”