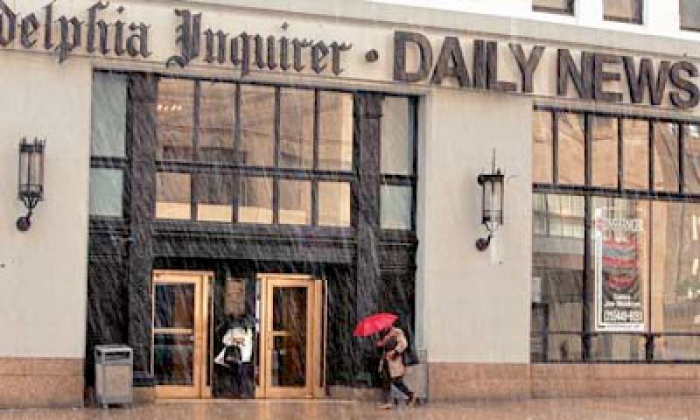 The decision to donate Philadelphia’s two main newspapers to a nonprofit organization highlights the deepening woes of big US dailies, but also suggests a possible lifeline for the troubled industry.

The Philadelphia Inquirer, part of a media group that includes the Philadelphia Daily News and the online site Philly.com, will be the largest and most prominent daily to operate as part of a tax-exempt public benefit corporation.

The idea has gained ground in recent years as metropolitan newspapers struggle with declining print circulation and advertising, with readers turning to the Internet for news, mostly for free.

A plan announced Tuesday by 85-year-old Gerry Lenfest, the sole owner and chairman of Philadelphia Media Network, puts the newspapers under the aegis of a new tax-exempt organization known as the Institute for Journalism in New Media, operated with the local Philadelphia Foundation.

Lenfest will provide $20 million in seed money and hopes the plan will allow the groups to maintain a tradition of independent public service journalism and investigative reporting.

A handful of other US dailies have tried this formula in an effort to preserve the local journalism seen as an important element in civic life.

The most well-known example so far has been the Tampa Bay Times, owned by the nonprofit Poynter Institute. But Poynter and the newspaper have been money-losers in recent years.

The Philadelphia plan would keep the existing news groups as for-profit entities under the umbrella of the foundation, which could receive tax-exempt contributions from civic groups and other benefactors.

“If it works, I think you’ll see this sort of ownership arrangement tried in other cities,” Kennedy told AFP.

“What I like about it is that the newspapers themselves will continue to be operated as for-profit entities, which means that they are free to sell advertising—thus keeping their revenue base diverse—and endorse candidates.”

But Kennedy said one risk is that the newspapers could be seen as serving the interests of their benefactors and that “someone will need to watch the watchdog.”

Borrell said newspapers could take a page from National Public Radio, which raises funds from members or others “willing to support a free press.”

“It’s a question of wether the business model of newspapers is good anymore and really can support the hiring of good journalists,” he said.

“What’s happening in Philadelphia with the move to a nonprofit model may foretell the future, particularly of larger newspapers. The question is will the public support free journalism with what is essentially membership fees or donations. I think they will.”

Some media observers say there are still many issues unresolved.

“On its face, it’s an acknowledgement of how low-profit newspaper companies have become,” Doctor said, adding that the structure of a for-profit within a larger non-profit may be complicated.

“It’s unclear what the tax, and pension obligations, impact may be,” he said.

“Most importantly, the big question is what it means to the news coverage that greater Philadelphia will get. Will the transfer and gift mean fewer layoffs and buyouts in the future. Will any of the recent staffing cuts be reversed?”

Rick Edmonds, a Poynter media analyst who worked at both the Tampa and Philadelphia newspapers, said there is no guarantee of success.

“The structure does not immunize us from the business model and digital challenges the rest of the industry faces,” Edmonds said in a blog. “Or from newsroom downsizing. Even if not operated to maximize profits, the Times, and now the Philadelphia papers, need to be well-run, adaptive businesses or they won’t have much of a future.”

The Inquirer had been among the largest and most prestigious US dailies but went into a downward spiral as it lost readers and advertising to online news operations. It saw several ownership changes and a bankruptcy filing as it slashed its newsroom.

Lenfest said in a statement that his goal “is to ensure that the journalism traditionally provided by the printed newspapers is given a new life and prolonged, while new media formats for its distribution are being developed.”

He will be the initial chairman of a 10-member board for the Institute, which will also include prominent journalists, academics and members of the philanthropic community.