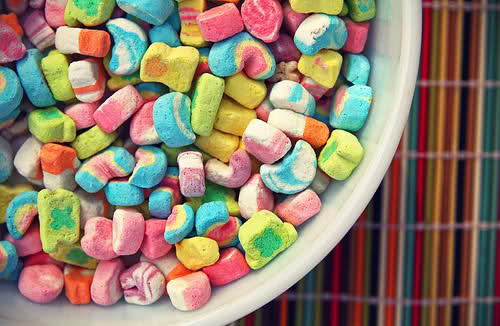 General Mills announced the “unicorn of the cereal world,” Marshmallow Only Lucky Charms, is finally a reality — but there are only 10 boxes.

The cereal maker said the 10 boxes of Marshmallow Only Lucky Charms will be given out as prizes in the “Lucky Charms Lucky Selfie” contest, which calls on participants to post pictures of themselves holding “imaginary boxes of Lucky Charms” on Facebook, Twitter or Instagram using the hashtag, “#Lucky10Sweepstakes.”

Entries must be posted by Oct. 18, the company said.

“A box of Marshmallow Only Lucky Charms has always been the unicorn of the cereal world — fantasized about, but never seen,” General Mills said on its website. “The Lucky Charms team receives countless calls, emails, tweets and Facebook posts from marshmallow-obsessed fans longing for a box filled with only the magically-delicious marshmallows.”

The company posted a YouTube video promoting the contest with recording artist Biz Markie adapting his 1989 song “Just a Friend” to fit the marshmallow cereal theme.