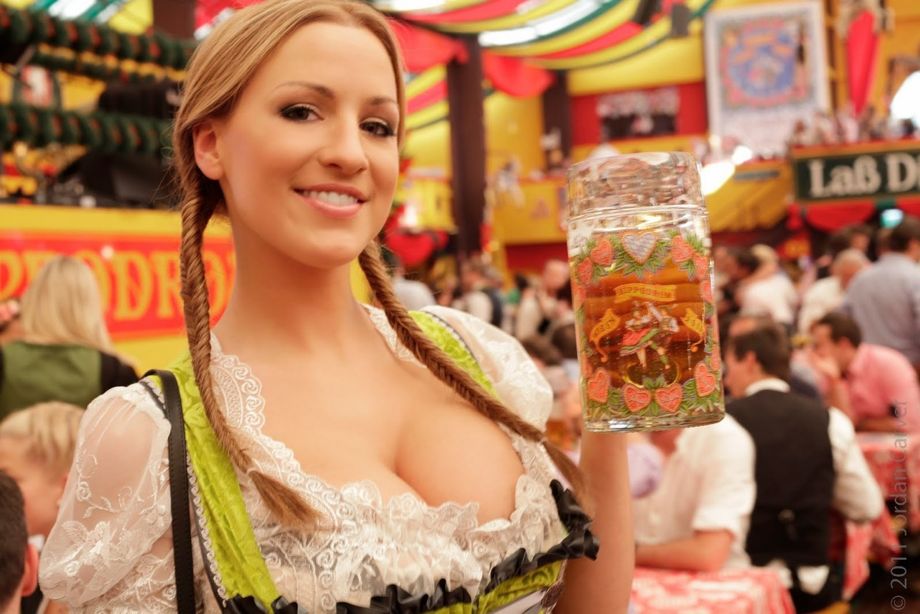 The largest Oktoberfest outside of Germany is in the twin cities of Kitchener & Waterloo in Ontario/Canada (1,000,000 visitors), Blumenau/Brazil (700,000+), Cincinnati, Ohio/USA (500,000+ visitors), and Denver, Colorado/USA (450,000+ visitors). In addition to North America, many other countries have their own Oktoberfest events:

The National Beer Festival (Fiesta Nacional de la Cerveza) is Argentina’s version of the German Oktoberfest. It has taken place every October since 1963 in Villa General Belgrano, Córdoba. The party emerged by the hand of the first German immigrants. This festival attracts thousands of tourists for 2 consecutive weekends.

In Australia, the universities are notorious in their celebrations of Oktoberfest, and as students graduate and move on, this has rolled over into pubs and restaurants in the university areas. The Harmonie German Club, Canberra, holds an Oktoberfest over a 3-day period every year. The festival is currently in its 45th year, and attracts a large number of visitors.

In Brazil, several southern cities, populated by Germans in the 19th and 20th centuries, have their own Oktoberfest, with the biggest one in Blumenau, celebrated annually since 1984. There are 18 days of music, dance and food, commemorating ancestors that came from Germany. In 10 days in 1984, 102,000 people (more than 30% of Blumenau’s population) attended, now it’s more than 700,000. Festivals are also being held in Santa Cruz do Sul and Igrejinha, Rio Grande do Sul, and Rolândia, Paraná.

In Canada there is an annual 9-day celebration spread over 18 Festhallen in Kitchener-Waterloo, Ontario. It attracts over 1,000,000 visitors annually. While its best-known draws are the beer-based celebrations, other cultural and entertainment attractions also fill the week. The most well-known is the parade held on Thanksgiving Day; as the only major parade on Canadian Thanksgiving, it’s televised nationally. (Coincidentally, the closing day of the Bavarian Oktoberfest also lands on the German equivalent of Thanksgiving, Erntedankfest.) The twin cities and surrounding area have a long history of German roots; Kitchener was formerly named Berlin. A large portion of the population identify as being of German heritage, many still speak German. A common phrase at the celebrations is Gemütlichkeit. The word is even programmed into bus route displays, so during Oktoberfest it will show the route and Gemütlichkeit, or Willkommen. Another celebration is held in Sherbrooke, Quebec at the beginning of October. The 1-night event is held by Sherbrooke’s University engineering students’ association and gathers around 5,000 people.

In Colombia it is sponsored by Bavaria Brewery. A series of concerts and events are held along different cities, with special emphasis in those with German background like Bucaramanga.

The Oktoberfest Hannover is a fair which takes place every year at the end of September/beginning of October. It usually lasts 16 days and features 160 rides and inns, 2 large beer tents seating more than a 1000 people each, and numerous stands offering refreshments. With more than 1 million visitors each year, it is the 2nd-largest Oktoberfest in the world.

The Oktoberfest was started here in 1991. It is celebrated in late Oct and early Nov (local dry season) and is hosted by the Marco Polo Hotel in Tsim Sha Tsui, just next to the Star Ferry pier. The hotel sets up a traditional tent with long wooden tables and benches with capacity for 1,500 to create an Oktoberfest atmosphere. The German Band Die Notenhobler from Ulm entertains the approx. 85% Chinese audience. Their program starts at 19:30 every night and comprises 3 parts: traditional German music, games and competitions, party music. The hotel caters traditional Southern German foods, such as pork knuckle, sausages with sauerkraut, and apple strudel or milk-cream strudel together with beer (past sponsors were Löwenbräu, Veltins, Jever, Löwenbräu). It’s a popular destination for private functions and staff parties of large corporations as well.

In Cork, the Francisan Well Brewery has an Oktoberfest festival whose dates parallel those of the festival in Munich. Downes Pub in Waterford have been celebrating annually since 2002 and their celebration culminates in an evening in October that features German beer-drinking music from the City of Waterford Brass as well as a wide selection of imported German beer. Oktoberfest is celebrated in University College Dublin each year with a Bavarian-themed festival taking place in the Pit next to the Forum bar on campus.

In Mexico, there are several cities celebrating this event, which has grown in popularity over the 19th and 20th centuries. The best known Oktoberfest takes place in the southern part of Mexico City, at the Club Alemán in the borough of Xochimilco. The German and German-Mexican community is a regular, but the event is attended by residents of many backgrounds. The celebration is in most traditional German fashion, with the Mexican fiesta kick. Typical German food and keg beer are available. A hand craft market and amusement rides are also set up.

An Oktoberfest celebration is held in the West Bank town of Taybeh, home to the only Palestinian brewery (Taybeh Brewery). The first Taybeh Oktoberfest was held in 2005.

In Romania, the Oktoberfest has been organized in Brasov (Kronstadt in German), Transylvania since 2009, in early Sept by the Deutsche Wirtschaftsklub, in association with local authorities. Traditional German and Romanian beers, foods, and music can be found in each edition.

German-Americans are the country’s largest self-reported ancestral group. Correspondingly, there are hundreds of large and small Oktoberfest celebrations held annually throughout the country, the largest being in Cincinnati, Ohio. Known for its large German immigrant population, Pennsylvania and its historic Pennsylvania Dutch (actually Pennsylvania Deutsch but Americans say Dutch and hence, mix us up with Dutch people from the Netherlands…) population are well known to have Oktoberfest celebrations during the months of Sept and Oct. These celebrations became increasingly popular among the general population in the later half of the 20th century with the rise of microbreweries, and with the opening of authentic German brew houses such as Hofbrauhaus in Pittsburgh, PA and Las Vegas, NV.