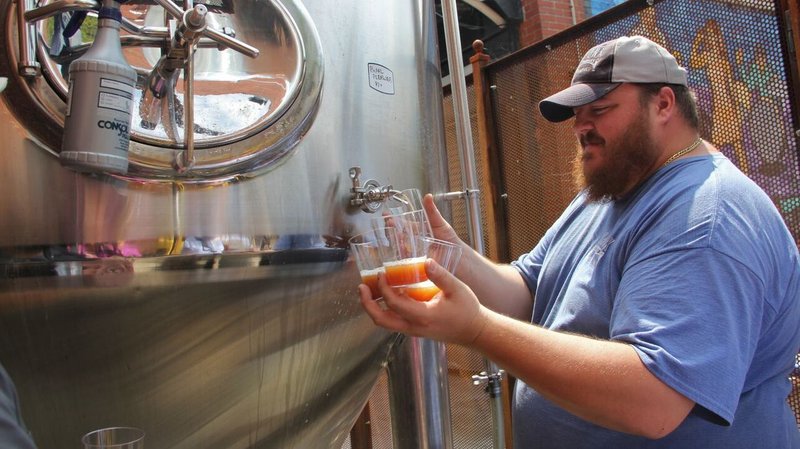 With more than 1 million people coming to Philadelphia when Pope Francis visits next month, enterprising businesses are coming up with stuff to remember him by, and it’s not just rosary beads.

“We thought about what kind of ingredients we were going to use,” says head brewer Evan Fritz. “We wound up using some malbec grape oak that was aged in some malbec wine from Argentina and some South American candy sugar as well.”

If you’re wondering whether a pint of Papal Pleasure would be delicious or sacrilegious, know that all of the brewing water was blessed by a local priest.

Philadelphia Brewing Co. created a Belgian-style tripel called Holy Wooder, a play on how a Philadelphian might say the word “water.”

Across the Delaware River in New Jersey, Cape May Brewing Co. has a pale ale on tap whose name is a variation of the phrase “you only live once,” or YOLO. It’s called YOPO — You Only Pope Once.

All three beers will be available at local bars during the papal visit, and some are being bottled in small amounts.

But if beer isn’t your thing, you can still “toast the pope” — literally.

Debby Fireman is selling a special toaster with metal inserts like stencils that brand Pope Francis’ face onto the bread. A second insert imprints a message, “spread the love.”

Fireman, who runs her own marketing firm, just couldn’t resist jumping into the papal marketplace and “celebrating the fact that he’s coming to our city — as well as just being able to create a little bit of a miracle on toast,” she says.

Her dream is to team up with Pastificio Homemade Pasta Co., a South Philly deli selling pope-shaped mozzarella, for a heavenly grilled cheese.

However, the window on popemania is closing.

“It really is a short window,” Fireman says. “It’s sort of right now and then when the visitors are here, and then maybe a little bit of buzz following when they leave, but then it’s on to the next thing.”