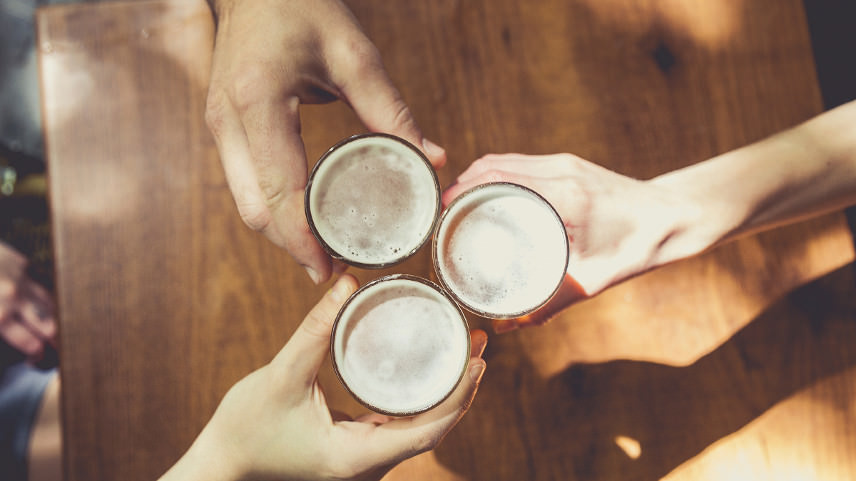 If you exercise, chances are you also drink. I know this because according to a new study from Northwestern Medicine, people tend to drink more alcohol on the days they’ve exercised. Especially beer. It could be because we reward ourselves with a post-run brewski, or because we’ve used up all of our willpower on exercise, so we have none left to deny ourselves that drink or two. Whatever the reason, if you’re drinking thinking that it’ll help you sleep, relax your muscles, numb the pain, or increase blood flow to help you recover faster, as they say in AA, that’s just stinkin’ thinkin’.

“It’s detrimental to drink alcohol after any type of exercise or workout,” says Professor Matthew Barnes of New Zealand’s Massey University School of Sport and Medicine. “I’ve never really seen anything that says it’s useful as far as recovery.”

He’s also never seen anything that says alcohol is useful for comptetion. Barnes’ most recent study on the impact of alcohol on sports performance and recovery in men concluded that “the consumption of even low doses of alcohol prior to athletic endeavour should be discouraged due to the ergolytic effects of alcohol on endurance performance.” Ergolytic meaning performance impairing. These effects, the study’s authors wrote, “are likely to inhibit recovery and adaptation to exercise.”

How does alcohol screw you up? Let us count the ways. Because it’s a diuretic, you’ll urinate more. “That leads to dehydration,” says Barnes, “and the result is detrimental effects on muscular contraction.” Every gram of alcohol you ingest increases urine flow by about two teaspoons. To put that in perspective, a 12-ounce can of beer contains about 14 grams of alcohol. That’s an extra half-cup of pee.

Alcohol also interferes with how your body produces energy. Pushing all that liquor into your liver leaves you with less glucose, the sugar needed to power your muscles. If an athlete runs out of it, they hit that proverbial wall “and most likely won’t finish the race,” Barnes says.

As for fixing your injuries, “if you consume alcohol, probably any amount, it’ll increase blood flow to [injured areas], because it’s a reasonably good vasodilator,” explains Barnes. But that’s not necessarily a good thing—it could make an injury bleed or swell even more, causing more pain. The body’s regulatory system functions quite well without the alcohol, Barnes says.

Alcohol can also poison muscle fibers. Beer, in particular, affects the fast-twitch anaerobic fibers by inhibiting an enzyme that helps fuel the muscle. When that happens, the fibers don’t adapt like they should for up to three days. The result: a longer recovery period.

As for that pain you say a glass of pinot erases? “Alcohol makes you feel less pain because of the effects on the nerve endings,” says Barnes. “So you can mask that pain with alcohol.” Which may not be as helpful as it sounds. “The pain’s there for a reason,” adds Barnes. “Ignoring it’s probably not a better approach.”

Athletes in particular seem to think that after a grueling game or an extreme workout, alcohol will help them relax and sleep better. “But it actually disrupts people’s sleep pattern,” says Barnes. “They don’t get a restful night’s sleep. And you need a restful sleep. That’s when growth hormones are released in your body, during the night.”

Finally, there’s the drunken food choices. One athlete Barnes studied had only three carrots the entire day after drinking, while another went through seven meat pies. “Athletes’ diets tend to go out the window,” Barnes says. “Alcohol throws them completely out of sync. They go for convenience.” That inadequate or improper fueling can lead to poor performance.

If you still think a post-race beer isn’t a bad idea, consider this: alcohol interferes with your muscles’ post-workout rebuilding process by reducing protein synthesis. “So not only does alcohol interfere with recovery of muscle damage and injury,” says Barnes, “it also reduces the processes responsible for building muscle.” There is a tiny silver lining: while not beneficial, a few glasses of alcohol comsumedafter a solid recovery meal and drink won’t necessarily cancel out all of the work you just did.

So opt for water or a sports drink right after a competition. “The key is to regain the weight loss, to get back to that pre-exercise weight,” says Barnes. As for a post-race meal, Barnes suggests something with about 20g of protein (enough to optimize protein synthesis post-exercise) and around 50g of carbs (usually high glycemic index, simple carbs to speed up glycogen synthesis), like a chicken sandwich or a baked potato and tuna. Then, if you must, you can have some alcohol.

“Other than the social side of it, I can’t see a benefit to alcohol at all, really,” Barnes says. “If you’re an athlete and you’re drinking alcohol, you’re just setting yourself up for failure.”