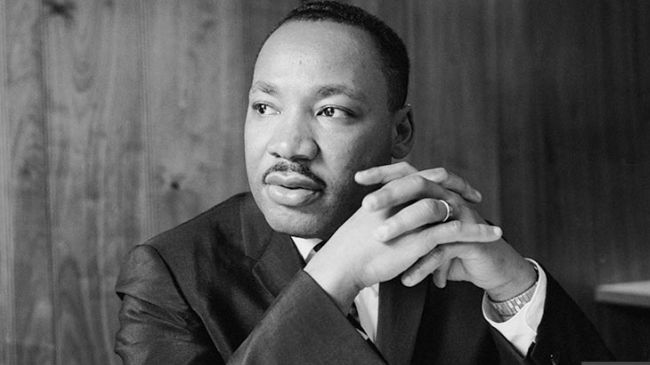 2) At the age of 12, he seems to have tried to commit suicide.  It was May of 1941 when his grandmother passed away after a heart attack.  At the time of this event, King Jr. was off disobeying his parents by going to watch a parade when they told him not too.  When he came home and learned his grandmother had died, he went upstairs and jumped from the second story window of his house.

3) King wasn’t the only one to die at the Lorraine Motel in Memphis on April 4, 1968.  After he was killed, one of the hotel workers, Lorraine Bailey (who was also the wife of the motel owner and who it was named after), upon seeing King get shot, had a heart attack and later died from this.  This was partially why there was such a delay in getting an ambulance as Lorraine was also the switchboard operator and so when Reverend Samuel Kyles attempted to call an ambulance using the phone in the motel room, nobody was at the switchboard to make that happen.  In Rev. Kyle’s own words,

I ran into the room and picked up the phone to call an operator or to call an ambulance. But, the operator had left the switchboard. There was nobody on the switchboard. I was saying, “Answer the phone, answer the phone, answer the phone.” And there was nobody on the switchboard. So the phone was not answered. (I learned later that the operator had gone out into the courtyard to watch Dr. King. When she saw what happened, she had a heart attack. She was the motel owner’s wife, and she died subsequently.) The police were coming with their guns drawn, and I hollered to the police, “Call an ambulance on your police radio. Dr. King has been shot.” They said, “Where did the shot come from?” … While waiting for the ambulance to come, I took a spread from one of the beds and covered him from his neck down. … I cannot tell you the feelings I had seeing my friend there on that balcony bleeding to death. Finally the ambulance came and took him away.

4) Also on the day King was killed, he was out on the balcony for a smoke.  While you’ll be hard pressed to find a picture of him smoking, he smoked regularly, though had a habit of hiding this partially due to the stigma, particularly within the church at the time, but also because he didn’t want his kids to take up smoking, and so didn’t like pictures of himself doing it, nor did he like to smoke when they were around.  According to Rev. Kyles, after King was shot but before he was taken away by the ambulance, Kyles removed the package of cigarettes from King’s pocket and got rid of the cigarette butt, partially to attempt to hide the fact that King was smoking at the time he was shot.

5) Martin Luther King Jr. was nearly assassinated a decade earlier than his ultimate death.  While on a book tour, signing copies of his book Stride Toward Freedom, on September 20, 1958, King was approached by Izola Ware Curry who asked him if he was Martin Luther King Jr., which he of course replied affirmatively.  When he said he was, she said “I’ve been looking for you for five years.”  She then pulled out a letter opener and stabbed him in the chest.

It took three full hours to remove the blade.  The reason?  The sharp point end of the blade was pressing against his aorta and the doctors had to be extremely careful while removing it because of this.  The doctor, Dr. Maynard, told him after, “If you had sneezed during all those hours of waiting, your aorta would have been punctured and you would have drowned in your own blood.”

6) King Jr. skipped two grades in high school, 9th and 11th, and entered college (Moorehouse College) at the tender age of 15 in 1944.  By 19, he received a bachelor’s degree in sociology.

7) He almost didn’t become a minister.  After graduating from college, he still had serious doubts about Christianity and the Bible and told his father (who was a Baptist minister, as his grandfather had also been) that he didn’t want to be a minister and instead was considering becoming a doctor or a lawyer.  He later decided that the Bible had “many profound truths which one cannot escape” and chose to become a minister, entering seminary at Crozer Theological Seminary in Pennsylvania.  He graduated with his PhD at the age of 25.

8) Although King today is often remembered as being an amazing public speaker, he got a C in public speaking during his first year at seminary.  This likely isn’t because he was actually bad at public speaking at this point.  His father noted that even before going to seminary King Jr. was one of the best public speakers he’d seen.  Whatever caused his professor to give him a C, by his final year King had straight A’s, was the valedictorian of his class, and the student body president.

9)  His honeymoon was spent at a funeral parlor… not because someone died, simply because a friend owned the parlor and offered to let him use it for his honeymoon.

10) King convinced “Uhura” on Star Trek, Nichelle Nichols (who incidentally later went on to work for NASA), to continue on with the role after the first season. Nichols stated he told her not to leave the show because she was not only playing a black person as a main character on TV, but she was also playing a character that didn’t conform to the stereotypical black person of the day, usually portrayed.  Rather, Uhura was portrayed as an intelligent member of the crew and an equal to those around her.

This seems to have had the intended effect.  Whoopi Goldberg once stated when she first saw the character of Uhura on TV, she said “Momma! There’s a black lady on TV, and she ain’t no maid!”  It was partially because of this that Goldberg became a huge Star Trek fan and later pushed so hard to get a character on Star Trek the Next Generation, despite the disbelief of the producers that she’d actually want to be on the show.

Astronaut Ronald McNair, the second black person in space (who also died in the Challenger explosion),was inspired to become an astronaut because of the character of Uhura.    McNair’s brother stated,

Now, Star Trek showed the future where there were black folk and white folk working together. I just looked at it as science fiction, ’cause that wasn’t going to happen, really.’ But Ronald saw it as science possibility. He came up during a time when there was Neil Armstrong and all of those guys; so how was a colored boy from South Carolina – wearing glasses, never flew a plane – how was he gonna become an astronaut? But Ron was one who didn’t accept societal norms as being his norm, you know? That was for other people. And he got to be aboard his own Starship Enterprise.”

11) King is to date the youngest male to win a Nobel Peace Prize, winning it in 1964 at the age of 35 (at the time he was the youngest overall for the Peace Prize).  The youngest ever to win the Peace prize today is Tawakkol Karman of Yemen who was just 32 when she won the prize in 2011.

12) King donated all of the $54,123 (about $400,000 today) he received for his Nobel Peace Prize to the Civil Rights movement.  During his acceptance speech, he stated “I believe that unarmed truth and unconditional love will have the final word in reality. This is why right temporarily defeated is stronger than evil triumphant.”

13) King won a Grammy and was awarded a Congressional Gold Medal and a Medal of Freedom.  The Medal of Freedom and the Gold Medal make sense, but how on Earth did he win a Grammy, you say?  He won it in 1971 for Best Spoken Word Album for “Why I Oppose the War in Vietnam”.

14) His house was once bombed.  This was during the Montgomery Bus Boycott, which lasted a total of 385 days.

15) His mother, Alberta Williams King, was also murdered.  She was killed while attending church in Atlanta in 1974 by a 23 year old man, Marcus Wayne Chenault, who believed “all Christians are my enemies”.  He shot and killed her while she was playing organ at the church.

16) King Jr.’s autopsy revealed that stress had taken a major toll on his body.  Despite being just 39 at the time of his death, one of the doctors noted that he had “the heart of a 60 year old”.

18) His “I Have a Dream” speech painted an even bigger target before on his back, not just with certain people in the general public, but with the FBI.  This was a memo circulated throughout the FBI offices after the speech:

In the light of King’s powerful demagogic speech yesterday he stands heads and shoulders over all other Negro leaders put together when it comes to influencing great masses of Negros. We must mark him now, if we have not done so before, as the most dangerous Negro of the future in this nation from the standpoint of communism, the Negro, and national security.

The FBI later discovered King was supposedly having numerous affairs and sent him various anonymous letters stating such things as “You are a colossal fraud and an evil, vicious one at that” and threatening to blackmail him.  In another anonymous letter supposedly from the FBI, they stated,

The American public, the church organizations that have been helping—Protestants, Catholics and Jews will know you for what you are—an evil beast. So will others who have backed you. You are done. King, there is only one thing left for you to do. You know what it is. You have just 34 days in which to do (this exact number has been selected for a specific reason, it has definite practical significant). You are done. There is but one way out for you. You better take it before your filthy fraudulent self is bared to the nation.

Many of the FBI’s surveillance records, written and audio records, concerning King are currently held in the National Archives, but are sealed from public access until 2027.

19) There are only two other people in American history that have a national holiday in their honor, George Washington and Christopher Columbus.  As such, Martin Luther King Jr. is the only native born United States citizen to have a national holiday in his honor. (*note:  While Washington was born in Virginia, obviously the United States did not yet exist. For reference, the first President to be born in the country of the United States was Martin Van Buren.  He was also the first President not of Irish or British ancestry- his ancestors were Dutch.)

20) Today over 700 streets in the Unites States are named after Martin Luther King Jr., with one such street in almost every major city.  This is not even counting the amazing number of buildings, schools, and the like named after him.

We’ll end this post with the following quote from the great Dr. Martin Luther King Jr. on non-violent resistance:

Non-violent resistance is not for cowards. It is not a quiet, passive acceptance of evil. One is passive and non-violent physically, but very active spiritually, always seeking ways to persuade the opponent of advantages to the way of love, cooperation, and peace.