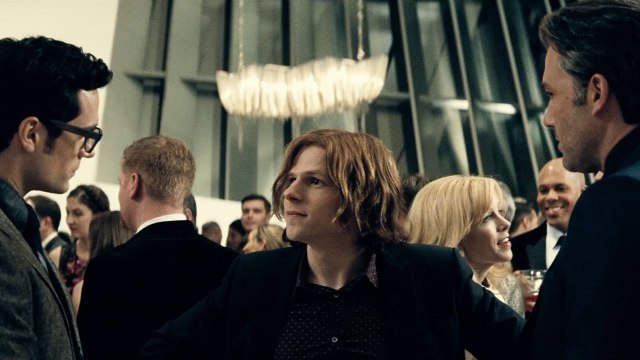 It’s the comic book universe’s great imponderable. In a world where Superman exists, what’s the point of any other superhero?

The guy has godlike powers, the purity of a savior and perfect PR. That’s got to cause some resentment and fear, right?

If he shows up 20 years into Batman’s reign of vigilante justice, the Dark Knight’s not going to take it well. And that makes The Bat ask the Big Question of the Man of Steel.

Zack Snyder, whose post-“300” years as a director have turned him into the most ponderous screen storyteller, tackles that rift in the long, hulking and utterly engrossing “Batman v. Superman: Dawn of Justice.” It’s a franchise-reboot that gives Superman relevance and a new actor a crack at The Dark Knight.

It swirls in a larger continuum, hurling a Next Generation (son of) Lex Luthor at the Man of Steel, a twitchy, antic supervillain who will test his Ego against Superman, and then his Id. Literally.

And it presents all this in a nation that is starting to question the mysterious alien’s motives, intentions and collateral damage. Can a democracy endure with a citizen who has that much power?

I mean, Batman (Ben Affleck) paraphrasing Dick Cheney’s “One Percent Doctrine” about how to treat even the remotest threats?

When the grizzled veteran vigilante Bruce Wayne puts down his gadgets and pistols and ponders his violent past, he’s not inclined to give the new guy the benefit of the doubt.

Holly Hunter is a senator in charge of Superman oversight. But Superman (Henry Cavill) doesn’t explain himself — to anyone. If lady love Lois Lane (Amy Adams) is in jeopardy, he’s there, making a mess and NOT taking names. Young entrepreneur Luthor (Jesse Eisenberg in Full Zuckerberg) plays with her fears.

Wayne/Batman has been on the hunt for a mysterious criminal overlord — who is selling weapons, tracking remnants of kryptonite, making the world less safe. And the Superman from Metropolis is messing up the Gotham Bat’s case.

Faithful butler Alfred (Jeremy Irons, perfectly dry) has tired of this crime-fighting and not producing a Wayne heir nonsense.

“Even you got too old to die young.”

The Bat, who has taken to branding his quarries, is bitterly sizing up his place in this New Superman World Order.

And there’s this mysterious, tall, on-task bombshell who sashays straight from the catwalk onto the periphery of this feud — Diana Prince (Gal Gadot).

“Batman v. Superman” was cobbled together from previous films and a pretty famous graphic novel treatment of this potential “war,” and often feels like that. From the opening credits (yet another version of Bruce Wayne’s origin myth) to the various chases through assorted Dodge/Jeep/Fiat products, and the many nightmares Batman has about the ways Superman could go wrong and be his and America’s doom, this is a comic book epic with a lot of fat and flab around the edges. But the fights are shorter and more involving than the “Transformers” cluttered clashes of “Man of Steel.”

And there’s this Hieronymous Bosch feel to the many slo-mo Messianic/Satanic tableaux.

But Cavill, not forced to carry a picture by himself, grows into the Man of Steel. And Affleck carries the Bat Cape and Bat Weight surprisingly well. Hunter and returning players Diane Lane (SuperMom) and Kevin Costner (Dad of Steel) add gravitas.

But Amy Adams was the casting stroke that continues to pay dividends. She gives the story heart and makes us feel the consequences. Everybody else is kind of vamping through the opera until the redheaded lady sings — or weeps.

It’s involving enough, with all the backfilling from previous stories and revenge and recriminations and communications breakdowns (How DO two superheroes set up a meeting?) and stuff about God and Metahumans and democracy and the responsibilities of power, that you forget the dread built into a picture like this.

It’s a franchise. They’ll be back. And they’ve just fired their most expensive, most impressive bullet. As repetitive as this half-decent reboot is, does the coming of the “Justice League” have a prayer of showing us something new?