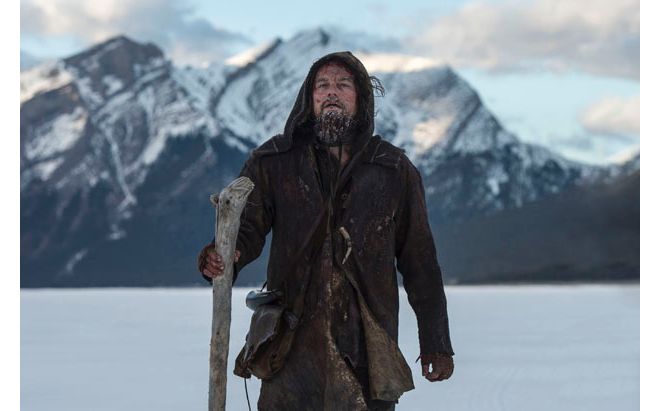 Of the bevy of movies that were screened down the stretch last year for local critics, there were few I was more excited about than “The Revenant”— and few I was more conflicted about afterward.

On one hand, movies don’t get much more visceral than this. This movie just feels wild, like it may come careening off the screen at any moment — all while somehow also feeling meticulously constructed.

On the other hand, it quite frankly can be a slog, as the pacing and the one-dimensional plot are a problem. The first hour of “The Revenant” feels like 20 minutes. The second feels like two hours. At times, it feels more like a dare — or a sheer exercise in testosterone — than a movie.

In his most audacious attempt at his elusive Oscar to date, Leonardo DiCaprio plays Hugh Glass, a frontier tracker and guide aiding a fur expedition as a hired hand. He navigates the team, led by Captain Andrew Henry (Domnhall Gleeson), through the dangers until one of the dangers catches up with Glass. After some treachery at the hands of one of the trappers (Tom Hardy), Glass is left for dead. Of course, he is not. If he were, this movie would not be more than 2 1/2 hours long.

And, boy, is it. Director Alejandro González Iñárritu comes out with an exhilarating pace, thanks in no small part to the collaboration of cinematographer Emmanuel Lubezki. Lubezki is god among working cinematographers. He shot Iñárritu’s last movie, “Birdman,” as well as “Children of Men” and “The Tree of Life.” Here, he took up the director’s insane idea to shoot in natural light. His camera is what puts us in the middle of this madness.

Well, that and DiCaprio’s performance, which sees the actor grunt and drag his way through everything that is thrown at him, come hell or high water — and there’s plenty of both. It’s more a feat of endurance than a performance, and while it’s a sight to behold, I feel the need to point out the award is for “best acting,” not “most acting.” In that regard, DiCaprio is actually outshined by Hardy, turning in one of the great villains of 2015.

As every step of Glass’ journey is laid out in painstaking detail, where it is leading is rarely in doubt, and how long it takes to get there makes this a feat of endurance for both the participants and the audience. It’s still a good film, but it seems the greatness it aspires to is just out of reach.