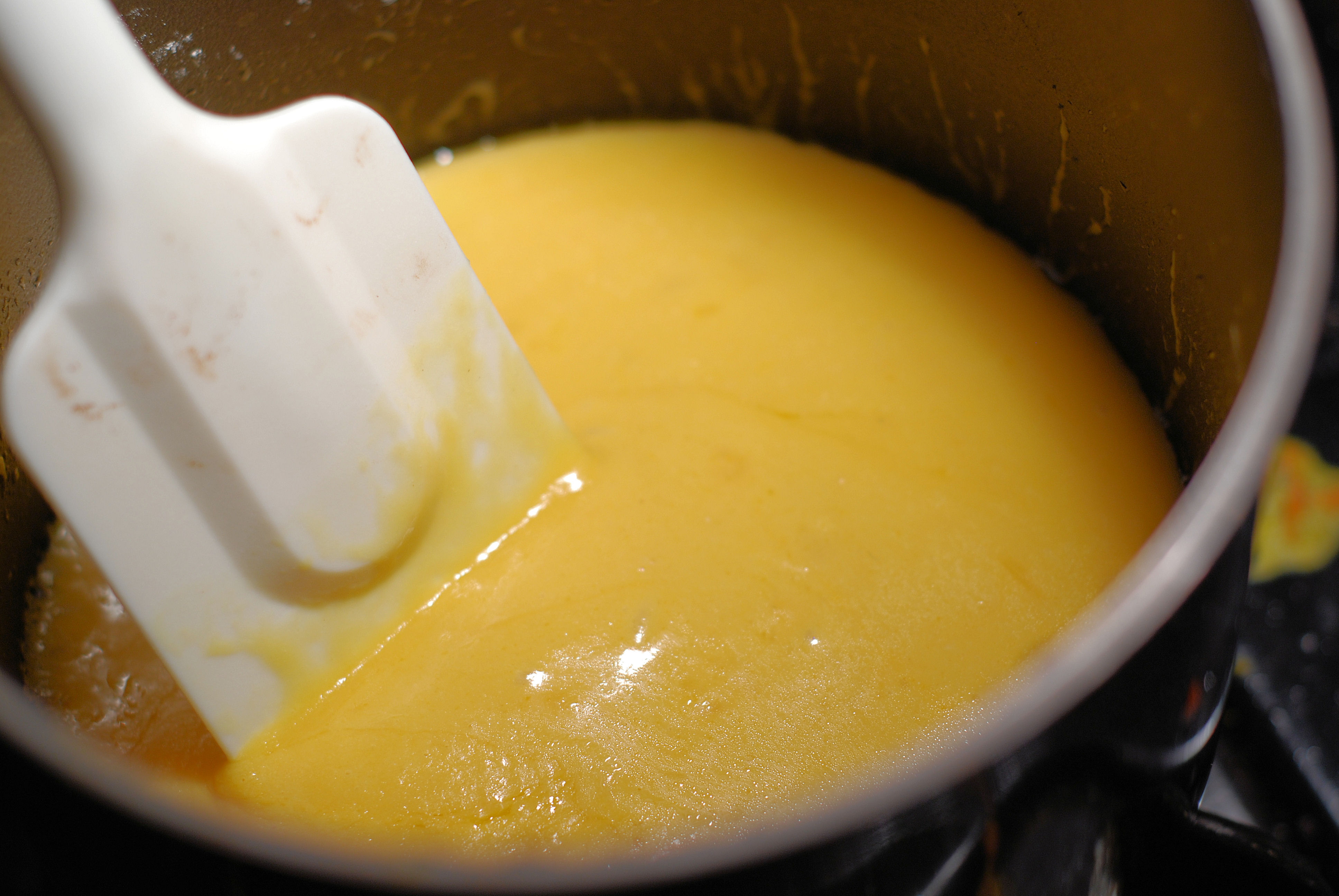 As America gets ready for their upcoming Super Bowl parties (or Royal Rumble party, if that’s your thing), Cheez Whiz – the yellowish-orange, gooey, bland tasting “cheese” product – will surely make an appearance at some of them. But what is Cheez Whiz? Why did get it invented? And is there really cheese in Cheez Whiz?

James L. Kraft was born in 1874 in Stevensville, Ontario on a dairy farm. When he was 28 years old, he immigrated to the United States, where he first chose Buffalo, New York to settle in. (Where a little over a half century later another common Super Bowl snack, the Buffalo Wing, was born. See: Who Invented Buffalo Wings)

Why he chose Buffalo (well over two hundred miles from his home in Ontario) over Detroit (under fifty miles away from Stevenson) isn’t known. In fact, there seems to be no real record at all of why Kraft went to Buffalo. But most important to this story, while there, he eventually invested in a small cheese company. He quickly rose up through the company and was invited to move to Chicago to run the cheese company’s branch there. After moving to Chicago, the company either went under or the heads of the company pushed Kraft out (records are conflicting as to what exactly happened there). Either way, Kraft was left stranded in Chicago, reportedly with little money (perhaps lending credence to the “went under” theory) and no job.

Using his meager remaining funds, he bought a horse (named Paddy) and a carriage. For the next few months before dawn every day, he would take Paddy and the carriage down to the wholesale market on Chicago’s Water Street and buy blocks of cheese in bulk. He would then sell it to the shop owners around town at marked up prices. His reasoning was that he was doing the hard part for them- finding and buying the cheese and then bringing it directly to the shop owners- and that was worth the markup. He was right. Within five years, Kraft’s business was successful enough that four of his brothers from Canada were able to come to Chicago and help James build his new cheese company. By 1914, they had incorporated as J.L. Kraft & Bros Company. That same year, they opened their first cheese factory in Stockton, Illinois. The next year, in 1915, they changed the cheese game.

While Kraft was the first to receive a US patent for processed cheese, he wasn’t the first to invent it. Walter Gerber and Fritz Stettler of Switzerland in 1911 experimented with their native Emmentaler cheese to see if they could increase the shelf life of cheese for export purposes. Their experiments included shredding, heating the cheese up to various temperatures, and mixing it with sodium citrate (still used as a food additive today) to produce a “homogenous product which firmed upon cooling.”

It is unclear if Kraft knew of these Swiss gentlemen, but, in 1916, he submitted for US Patent 1186524, which was titled “Process of sterilizing cheese and an improved product produced by such process.” In it, it describes a way, “to convert cheese of the Cheddar genus into such condition that it may be kept indefinitely without spoiling, under conditions which would ordinarily cause it to spoil, and to accomplish this result without substantially impairing the taste of the cheese.”

It goes on to explain the process of slicing, heating, and stirring cheddar cheese in great detail, how it needed to be heated to 175 degrees Fahrenheit for 15 minutes while being whisked continuously. The patent never mentions the addition of a sodium additive or “emulsifiers” (be it sodium citrate like the Swiss or a more general sodium phosphate). This likely is due to the fact that patents are, of course, public and whatever Kraft added to the mix, he probably wanted to keep it a secret from the competition, a fairly common practice in the food industry. This was the birth of commercialized processed cheese.

Kraft’s revolutionary new cheese product couldn’t have come at a better time for him, at least business-wise. When the United States entered World War I in 1917, there was a need for food products that would last and could be shipped long distances. By packing his cheese into 3-1/2 and 7-3/4 ounce tins, Kraft was able to become the cheese supplier to the US Army, earning himself a huge payday and a whole generation of soldiers trying out his cheese.

Flash forward about twenty five years, to 1952. Kraft Cheese, besides now having changed the name, was also now the number one cheese seller in the United States. (At the time, they were also selling other dairy products and even candy.) America was in the middle of the post-war economic boom and at the beginning of the “convenience culture,” when products that made life easier were highly sought after, which also gave rise to the TV Dinner. Towards this end, just two years before this, in 1950, Kraft developed a revolutionary convenience-oriented product, pre-sliced, pre-packaged cheese – the famous “Kraft Single.”

It was around this time that Kraft Cheese was doing great business in Britain, thanks to having sent processed cheese off to World War II with the allied soldiers. This bring us to a popular English dish called Welsh rarebit, which is basically a hot, melted cheddar cheese sauce poured over toasted bread – think an open-faced grilled cheese. While delicious, the cheese sauce is actually rather labor-intensive to make, requiring much time and careful stirring. Kraft, trying to appease their British customers, asked their team of food scientists led by Edwin Traisman (who would later help McDonald’s flash fry their french fries) to come up with a faster alternative for this cheese sauce. After a year and half of experimentation, they did. Cheez Whiz was introduced in Britain in 1952, and soon after across the United States.

Given its reputation, it might surprise you to learn that Cheez Wiz was, in fact, originally made with quite a bit of real cheese. However, very recently, this changed.

In 2013, Michael Moss, a writer for the National Post (a Canadian national newspaper), spoke with Dean Southworth, a member of Traisman’s team at Kraft in the 1950s that helped develop Cheez Whiz. Southworth, a huge fan of the original Cheez Whiz, said that the original was, “a nice spreadable, with a nice flavor. And it went well at night with crackers and a little martini. It went down very, very nicely, if you wanted to be civilized.”

However, in 2001, he settled down for a “civilized” evening of one of his favorite snacks- crackers, martini, and Cheez Whiz that he had purchased from the store that day. Upon spreading the Whiz onto a cracker and taking a bite, he said he exclaimed to his wife, “My God, this tastes like axle grease!” Something had radically changed in this jar of Cheez Whiz from the last he had purchased.

Indeed, when he looked at the ingredients list, he saw as you’ll still see today- Cheez Whiz sold in the United States does not explicitly list cheese in the ingredients anymore. Rather, if you look, you’ll see 27 other ingredients, including whey (a protein byproduct of milk, the liquid left after the milk has been curdled and strained), corn syrup, and milk protein concentrate (a cheaper alternative to higher-priced powdered milk). When Moss and Southworth approached a Kraft spokeswoman about this in 2013, she told them there was actually still cheese in the Whiz, though much less than there was before. When asked just how much real cheese was still included in the product, she declined to comment.

She claimed the reason cheese wasn’t listed on the ingredients anymore was because the label already listed the necessary parts of processed cheese (i.e. milk, sodium phosphate, cheese cultures), therefore no need for “cheese” to be explicitly stated. At the end of the conversation, she explained, “We made adjustments in dairy sourcing that resulted in less cheese being used. However, with any reformulation, we work hard to ensure that the product continues to deliver the taste that our consumers expect.”

Mr. Southworth, of course, didn’t care for the new taste. In the end, the use of some of the ingredients of cheese, rather than cheese itself, has some business benefits. As Southworth said, “I imagine it’s a marketing and profit thing. If you don’t have to use cheese, which has to be kept in storage for a certain length of time in order to become usable… then you’ve eliminated the cost of storage, and there is more to the profit center.”