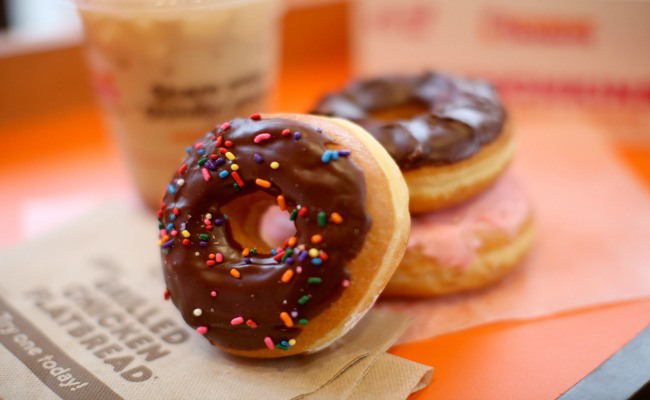 Recently, Dunkin’ Donuts held a press summit at their headquarters in Massachusetts to announce changes to the menu and new features on their mobile app. Firstly, they’ll be adding macchiatos this month, in a variety of flavors, including pumpkin spice. (They already have lattes, espressos, and cappuccinos, so it’s more like completing a set, really, than competing with Starbucks.) This is in addition to the new specialty donut flavors they announced last month.

But even more promising: They’re rolling out an updated version of their DD Perks app, which already lets you pay with your phone and take advantage of exclusive deals. The new app will allow some Perks members access to a home delivery service, which will be managed by a third-party delivery company. The company revealed in June that they’ve been testing delivery service privately.

The market they’re going to start delivery in has yet to be revealed, though it’s a safe bet it’ll probably be somewhere in New England, where the majority of their nearly 11,000 franchises are located. (500 in New York alone.)

Also part of the app upgrade that will be available to all Perks members is online / mobile ordering, with curbside pickup. No longer will you show up 15 minutes late with your latte.

Coffee and donuts delivery makes sense, not just because most small donut stores already deliver (usually with the help of a third party service), but because McDonald’s and Starbucks are also efforting a way to bring you breakfast in bed.

According to Delish, the rollout isn’t expected until 2016 at the earliest. So it might be a while yet before you have to decide whether to put on pants to answer the door for the coffee-man. The future is so rad, but still so uptight about nudity, man.