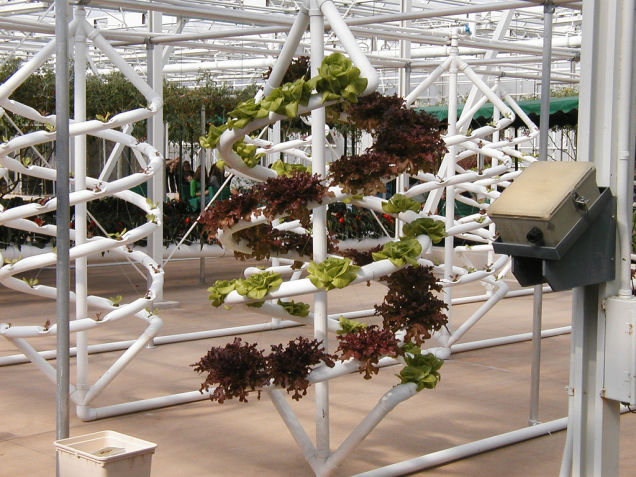 If our planet is going to support an extra four billion people by the end of the century, we’ll need to find some creative new ways to feed ourselves. One option would be to turn buildings into farms and grow our crops in the air.

Both of these radical notions involve aeroponics, a method originally developed by NASA to grow food in space. Aeroponic plants require no arable land or soil, and only minimal water. Proponents say that with proper environmental controls, aeroponics could dramatically reduce agricultural energy inputs, eliminate the use of pesticides and fertilizers, and increase crop nutrient densities.

But is this sort of high-tech farming workable at the scales needed to feed entire cities, or will aeroponic veggies remain the exclusive snack of well-heeled nerds for years to come? To find out, I spoke with Caleb Harper, founder of MIT’s CityFARM and a pioneer in the development of the techno-farming methods that may, one day, feed the world.

But is this sort of high-tech farming workable at the scales needed to feed entire cities, or will aeroponic veggies remain the exclusive snack of well-heeled nerds for years to come? To find out, I spoke with Caleb Harper, founder of MIT’s CityFARM and a pioneer in the development of the techno-farming methods that may, one day, feed the world.

At CityFARM, the “plant factory” supported by MIT’s Media Lab, crops like broccoli, strawberries, lettuce and peppers dangle from shelves stacked along glass-paneled walls. As Harper explains, when plants are suspended in open air and misted with an ultra-fine spray, their roots bloom with tiny hairs, dramatically increasing the surface area available for nutrient uptake.

“Growing in this way allows plants to activate all of their root system,” Harper said. “In soil, a plant may dig around and wait, but it doesn’t fully express its ability to gain water and minerals. In aeroponics, you can drive the plant much faster.”

To fully optimize the growth environment, Harper’s research team is using data science tools to meticulously monitor their crops’ needs. Sensors attached to sentinel plants monitor vitals such as leaf turgor; this information is fed into computers and used to determine exactly when, and for how long, the plants require misting. The water-mist contains carefully doled out portions of every nutrient the plant needs—nitrogen, phosphorus, potassium, and the like. Harper claims this approach to be 70 to 90 percent more efficient than traditional watering methods, with the potential to be 98 percent more efficient.

When water and nutrients are available in abundance, plant growth often becomes limited by light. CityFARM is pushing this boundary by using LED growth lamps to augment natural sunlight. The LEDs are tuned to the red and blue portions of the visible spectrum plants use for photosynthesis. In nature, plants have sift through many different wavelengths of light to filter this “photosynthetically active” part out. Heliospectra, the company that makes city farm’s growth lamps, believes the sun is old school and that, with a well-calibrated growth lamp, many crops can do without it entirely.

The experiment may be small-scale for now, but so far, results have been, well, unnaturally good. CityFARM’s crops grow three to four times faster than they would in nature, on a 30-day cycle, 365 days a year. Harvests from the 60-square foot building have supplied produce to the Media Lab’s three hundred employees.

Food for the Future

There’s no denying the technological ingenuity on display at CityFARM . Same goes for other proof-of-concept indoor farms, like Chicago O’Hare airport’s aeroponic garden. But are such systems scalable? Their tech-intensive poses clear challenges. At the end of the day, anyone interested in aeroponic growing will have to weigh the benefits of improved yields against cost of technological investment.

“We’re just at the point of scaling it for high-value products—you see pharmaceuticals and cosmetics companies using these techniques,” Harper said. Soon to follow suit, Harper predicts, are crops that are expensive in supermarkets and easy to grow, like leafy greens, herbs, and out-of-season berries. Scaling up further may become economically viable if aeroponic systems can be retrofitted into the existing glass-curtain walls of high-rise buildings, a possibility which CityFARM is exploring.

A radically different option may be to go smaller. Harper’s latest project involves building 2 x 2 x 2 foot aeroponic grow boxes in which every single aspect of a plant’s environment is precisely monitored and controlled. He calls it the “personal computer for food.”

“Inside the box, we create climate: everything from CO2 to oxygen to temperature and humidity,” Harper told me.

A plant’s flavor is as much a product of its genetics as its environment. By curating all of the environmental factors, Harper imagines that individual users will be able to create their own “designer veggies,” the recipes for which can be saved, stored and shared all over the world.

“Once you’ve grown something, say, a tomato, you get a data recipe,” Harper told me. “That recipe says exactly how much CO2, water and light to use. Then you call your friend, he downloads the recipe into his box, and presses play. He’ll then be able to make the same exact tomato—same texture, color and flavor.”

Of course, designer boxes that allow you and your friend to grow identical vegetables on opposite sides of the world are a far cry from a system that feeds a city. But to Harper, the personal computer is just the beginning.

“Say you had 10,000 of these little boxes scattered about a city. As products, their individual use and value is very limited,” Harper said. “But if they could talk to each other and learn from each other, eventually, we have a distributed food computer. Part of my work is grappling with what that would even mean.”

It may be decades yet before fields of corn and wheat become a common sight on city skylines, or before plant computers infiltrate our homes. But such ideas speak to the desire to reinvent agriculture in a way that’s compatible with the modern, urban world. Today, it’s estimated that every calorie Americans consume costs roughly ten fuel calories to produce and ship from farm to table. If Harper is correct that his high-tech grow methods can decrease energy consumption by as much as 80 percent, that’d be a win for the environment and the bottom line.

Personally, I can’t wait to plug in my food box and start designing dinner.