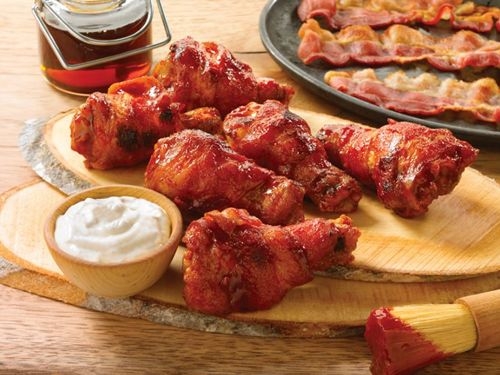 To attract millennials, Hooters is taking a couple of points from Buffalo Wild Wings’ playbook.

Much like the hugely successful wing chain, Hooters will offer a limited-time menu during the NCAA tournament.

Items on Hooters’ promotional menu include bacon-wrapped chicken wings and a chili-cheese dog called “Porky’s revenge,” according to Foodbeast.

Offering limited-time menu items and wings has been a successful strategy for Buffalo Wild Wings.

The brand releases new chicken wing sauces 7 times a year in flavors like Korean BBQ and Chipotle Cherry Sting. Many of the special flavors have sold out.

Hooters had its heyday two decades ago, but has struggled to attract young customers.

The brand is also expanding overseas.

The so-called “breastaurant” is planning to open more than 30 restaurants in Southeast Asia over the next six years, executives announced in a release.

Hooters already has a presence in Thailand, and is looking to expand into Cambodia, Indonesia, Laos, Malaysia, Myanmar, the Philippines, Singapore, Thailand, and Vietnam, as well as Hong Kong and Macau.

The company, which is known for scantily clad waitresses, has had flat sales in recent years.

Part of Hooters’ problem is an overall slump in the casual-dining sector as consumers turn to faster options like Chipotle, Panera Bread, and Five Guys.

But the brand has also dealt with competition from similar chains.

Tilted Kilt has more than 100 locations, with plans to open more, according to Bloomberg. Meanwhile, Hooters has been closing restaurants.

In addition to Tilted Kilt, Hooters is also facing competition from other “breastaurant” rivals such as Twin Peaks, Ker’s Winghouse, and Brick House Tavern + Tap.

Twin Peaks’ sales increased 68% to $165 million in 2013 over the previous year, as the chain nearly doubled its locations, according to Technomic. Sales at each of the latter two chains, which are the fourth- and fifth-largest breastaurants by sales, increased by 11% over the same time period.

These rival brands have succeeded by attracting a younger crowd and offering a broader menu than Hooters.