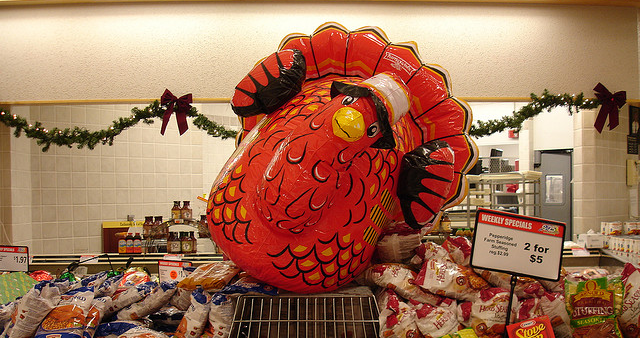 We’ve written before about the overuse of antibiotics in turkeys and how it contributes to the development of drug-resistant bacteria, and some companies have pledged to cut down on the amount of unnecessary antibiotics they feed to their birds. But was the turkey you’re planning to carve up next Thursday raised using these and other potentially harmful drugs?

That’s the subject of a new report [PDF] from non-profit group Food Animal Concerns Trust, which looked at the nation’s largest turkey producers and their policies for antibiotics use and the feed additive ractopamine, which is allowed in the U.S. but banned in dozens of other countries around the world.

The FACT survey asked companies to provide information regarding three key issues. First, do they use medically important antibiotics for “disease prevention”? This is a common reason given by farmers to employ antibiotics, but many scientists believe that continual, low-dose prophylactic use of antibiotics only has the end result of further encouraging the development of drug-resistant pathogens.

The second question involves the use of antibiotics for growth-promotion. In 2013, the FDA asked drug companies to remove growth-promotion as an allowable use for their animal antibiotics. Of course, that doesn’t stop these drugs from continuing to work as growth-promoters; it just means the farmers have to change their reason for using the antibiotics to “disease prevention.”

Finally, there’s the issue of ractopamine, a lean-ness promoter used in the last stages of turkey farming that encourages muscle growth without additional fat. The drug can have possible ill effects on the wellness of the animals that receive it, and it has been banned in many other countries over concerns about the potential risk for heart problems in humans who eat meat from animals treated with ractopamine.

According to the report, only two of the large turkey companies — Tyson (Hillshire Farm), and Hain Pure Protein (Plainville Farms brand) — avoid the use of all antibiotics and ractopamine.

All of the others at least use antibiotics for disease prevention, though biggies like Cargill and Foster Farms claim to not use the drugs for growth-promotion.

When Cargill first announced its “no antibiotics for growth-promotion” policy in 2014 some industry watchers were skeptical that the company was merely paying lip service to the idea, as “disease prevention” use of antibiotics can be identical in terms of dose, duration, and prevalence to that of growth-promotion.

Similarly, Foster Farms — the poultry giant behind a massive outbreak of salmonella in 2013 — announced this past summer that it will eventually eliminate all medically important antibiotics from its birds, but was criticized for not providing a more specific timeline to reach that goal.

Probably the two most recognizable names in turkeys — Butterball and Perdue — use antibiotics for both preventing disease and to get bigger birds.

As for ractopamine, while only three producers are listed as using the drug to raise lean, large turkeys, that group includes the fourth-largest producer, Farbest, and household name Kraft.

Here is a chart summarizing the results of the survey: