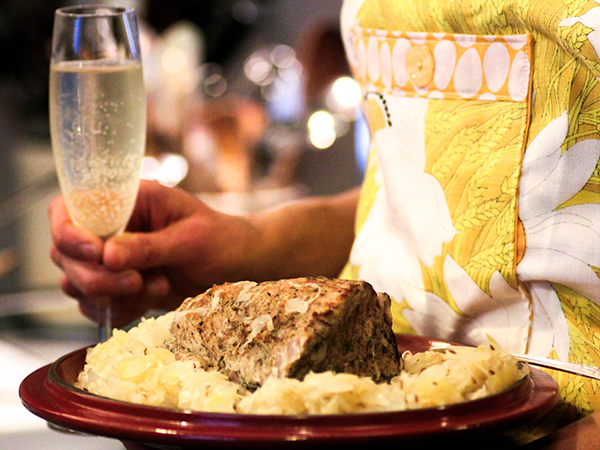 As funky fumes of sauerkraut blanketed our house year after year, the younger me resented the letdown of New Year’s Day. The excitement of Christmas was officially over, it was time to head back to school, and of course my family’s good luck food wasn’t something kid-friendly, like cookies or ice cream. My mother cooked up her annual big pork roast, mess of sauerkraut, and a pot of black-eyed peas. I wanted none of it, dining sulkily on a pallid pile of mashed potatoes.

Now I’m the one who’s gladly stinking up the house with kraut, pork, and peas; I like these foods and don’t just limit them to the turn of a new year. But I’ve always wondered about our family custom. My mother grew up in Ohio with lots of German and Polish neighbors, while my dad’s gaggle of military brat siblings lived on Air Force bases in Florida and Louisiana. Mom brought the pork and kraut to our table’s traditions; Dad, the black-eyes. But which cultures started these celebratory superstitions in the first place? And why those foods?

To dig a little deeper, I chose four popular regional American good luck foods of the new year—the pork and sauerkraut of the Midwest, the greens and black-eyed peas of the South, the pickled herring of Scandinavian immigrants, and the lentils of Italian-Americans—on a quest for the facts behind the fortune.

Cabbage, the star of sauerkraut, is green like money. As are collards and other sturdy braising greens, obviously. Round, disc-like lentils resemble coins. The silvery scales of pickled herring give off the glint of wealth. Pork comes from pigs, an animal rich with fat. As for black-eyed peas…one of the reasons tossed off lazily in encyclopedia entries and Internet listicles is that they resemble coins. Even my four-year-old won’t buy that one.

Coins, paper currency, richness: money, money, money. To me, though this oft-cited connection to moolah is as fishy as herring. Bank notes aren’t always green, for instance. Other meats, such as lamb, are marbled with lots of rich fat, not just pork. Plenty of fish have silver scales besides herring. Let’s examine not just the food themselves, but which cultures identify with them most closely, and what role those foods played in their daily lives, here in America and in their lands of origin.

Black-Eyed Peas and Long-Cooked Greens: From the Talmud to the Civil War And Beyond

When you find a coin—any coin—that looks like a black-eyed pea, please call me. Until then, let’s go back at least 1,500 years to trace the good-luck associations of this healthy, historically significant little bean (and yes, botanically speaking, they are beans, not peas.)

“In the United States, few foods are more connected with African-Americans and with the South,” wrote Jessica B. Harris, a scholar of the foodways of the African diaspora, in the New York Times. “Without the black-eyed pea, which journeyed from Africa to the New World, it just isn’t New Year’s—at least not a lucky one.” Two physical properties of dried black-eyed peas (much more likely available in the depths of winter than freshly shelled ones) symbolize good things to come: the promise of germination when planted, and increasing significantly in size when cooked.

But black-eyed peas also have a little-known ancient history as a good-luck tradition that started not in Africa, but with a list of five foods mentioned in the Jewish Talmud to eat on Rosh Hashanah (the new year) to ensure good fortune. Black-eyed peas are not on this list, but fenugreek seeds are, explains historian Gil Marks in The Encyclopedia of Jewish Food. The Talmud refers to fenugreek seeds as rubia, which sounds like yirbu, meaning “to increase.” Sephardim confused that with lubia, the word for black-eyed peas, and they began incorporating black-eyed peas into their new year’s good-luck spread. Some sources say that Sephardic Jewish colonists introduced this custom to the American South (Jews settled in Georgia as early as 1733).

Black-eyed peas, which were first domesticated in Africa 5,000 years ago, were thought to have made their initial arrival in North America though slave ships, predating the arrival of Jews in the colonies. And Rosh Hashanah, the Jewish New Year, is usually celebrated in September. So it seems unlikely that the Talmud alone was the spark of the black-eyed pea’s associations with fortune in the South, especially when the food became so prominent in the diets of slaves—and, eventually, their masters.

After the Civil War, hungry Union soldiers ate up Southern crops, but they left behind black-eyed peas, which they considered livestock feed; the hearty legumes provided much-needed sustenance during the Reconstruction for Southerners of all classes.

“Peas for pennies, greens for dollars, and cornbread for gold,” goes an old Southern saying. It’s worthy of note that all three were staples of hard-working households that were not flush with income. Collards, turnip, mustard are all common braising greens of the South, though cabbage can make a cameo, too. Cheap, plentiful, and easy to grow, collards in particular are flat, like paper currency, and thus favored.

Paired with the rice and black-eyed peas of the iconic dish Hoppin’ John, greens make a nutritionally complete meal that balances color, texture, and flavor. Put on the Bud Powell Trio’s 1953 recording of “Collard Greens and Black-Eyes Peas” while supping on just that, and your year is already off to a fantastic start. Quite likely a hunk of cured pork flavors your beans or greens, raising your good luck up another notch.

Pork and Kraut: Progress, Fermented Cabbage, and the Cycles of Farm Life

Pork is a celebratory dish in any pig-loving culture. Pigs relentlessly root ahead as they eat, as opposed to the backwards scratching of chickens and turkeys, and so are considered a symbol of progress. “And sauerkraut with pork was eaten for good luck on New Year’s Day, because, as the [Pennsylvania] Dutch say, ‘the pig roots forward’,” historian William Woys Weaver wrote in Sauerkraut Yankees.

All over the Midwest, people pounce upon superstition and put a glorious hunk of pork at the center of a holiday table. I took a casual poll of friends who live or grew up in Ohio, Pennsylvania, and West Virginia, and they all immediately mentioned a meal of pork and sauerkraut as an indispensable New Year’s ritual. Besides the high population of folks with German heritage in the Midwest and swaths of Appalachia, there are also pockets of people with Hungarian, Polish, and Czech ancestry.

My mother’s pork roast (usually a boneless pork butt cooked separately from the sauerkraut, but a one-pot braise of pork and kraut is common) is only one manifestation of the torrid Midwestern pork-and-cabbage love affair. Pork-stuffed cabbage rolls and kraut with chunks of kielbasa also appear at New Year’s meals. They’re rib-sticking, savory fare for a wintery day, but is there a reason for this tradition besides the direction a pig dines?

“Everybody rejoices when November kills its pig,” reads a Latin inscription under a painting depicting pig butchering on the great clock of the Münster cathedral. Pork has always been a cultural touchstone in Germany and Eastern European countries. Peasants who raised pigs slaughtered them in the fall, in part because it’s a good food safety practice to embark upon the time-consuming task of butchering a large animal when it’s cold outside. The weeks following the slaughter afforded more fresh cuts of pork than the preserved hams and sausages relied upon otherwise, and a family could plan ahead and reserve a choice cut of pork for New Year’s Day.

As for the sauerkraut, the fall likewise was the height of cabbage harvesting, and thus the shredding and pickling of pounds and pounds of it to preserve as sauerkraut. If you’ve ever brined your own sauerkraut, you know it can take six to eight weeks to ferment—in fact, I start my own batch of kraut in late October with designs on New Year’s Day feasting. The timing is too perfect, as is the culinary pairing: rich, fatty, and salty pork is the soulmate of tart and lean kraut.

Besides that, the long shreds of kraut are thought to symbolize a long life. And then there’s the whole cabbage-green-money connection, even though American paper money hasn’t always been green. Besides, by the time kraut hits the table, any past resemblance to cash is long gone.

Silver-scaled herring probably look more like money than any other fish, and historically, the herring catch was crucial to economic prosperity of merchants in the market towns of the Hanseatic League of the North Sea.

Atlantic herring was and is an important food to many Europeans. It’s high in Omega-3 fatty acids and lends itself to preservation via pickling, fermentation, drying, and smoking. Pickled herring in particular are popular in Scandinavian, Dutch, Nordic, Polish, Baltic, and Jewish cuisines. The 17th century Dutch poet Voost van den Vondel referred to the fish as “royal herring,” not just for the nourishment the fish provided, but for the flourishing international trade it created. Imports of wood for shipping casks and salt for preserving and exports of pickled herring drove a sizeable portion of European trade.

It’s a quirk of herring that their migratory patterns are unpredictable; waters that were thick with the fish for decades could suddenly experience dismal catches. According to Time-Life Books’ Foods of the World: The Cooking of Scandinavia, “Herring, appearing offshore one year in shoals a half dozen miles long and wide, the next year could vanish almost completely…so varied was the herring that it was looked upon as a bearer of divine messages. Even when herring was abundant, there was always the hazard that there would not be enough available salt to preserve the catch.” To eat herring at the New Year was not only a celebratory rite, but a small prayer of sorts, a wish for the catch and the trade to line up with prosperity.

With herring’s cultural significance so widely dispersed, the eating of pickled herring for good luck is thus not concentrated in any one region of the United States. However, areas with a large Scandinavian population, such as Norwegian and Swedish communities in Minnesota, will indulge in herring bonanzas this December 31, when tradition dictates to eat the fish at the stroke of midnight.

“Of all the legumes, lentil is more frequently mentioned in Greek and Roman literature,” writes Kimberly B. Flint-Hamilton in Legumes in Ancient Greece and Rome: Food, Medicine, or Poison? Lentils were a staple in the ancient Mediterranean world, and would have been a common sight, especially in lower-class households. When I peer at the contents of my piggy bank, lentils do not spring to mind, but if you consider what ancient Roman coins look like—irreguarly round, often with a brownish patina—the connection between lentils and good fortune makes a lot more sense.

To this day, all over Italy, people welcome in the New Year with various lentil dishes (“It wouldn’t be New Year’s in Italy without lentils and sausage,” said Mario Batali himself), and the tradition endures in Italian-American families. One such dish is cotechino con lenticchie. Cotechino is a large pork sausage; when the cylinder is sliced, it likewise bears a coin shape. Brazil, Czechoslovakia, and Hungary also have special lentil preparations for the New Year.

Despite my own fondness for sausages, greens, lentils, and fishy things, this year I’ll stick to my family’s own mash-up of good luck foods, the pork roast and the stinky kraut and the slightly musky black-eyed peas (they go together surprisingly well.) Luck is something humans no influence over, but the solace we take in cultural and culinary identity is. These rituals of eating special foods remind us who we are, where we’ve been, and the ways we hope to thrive.