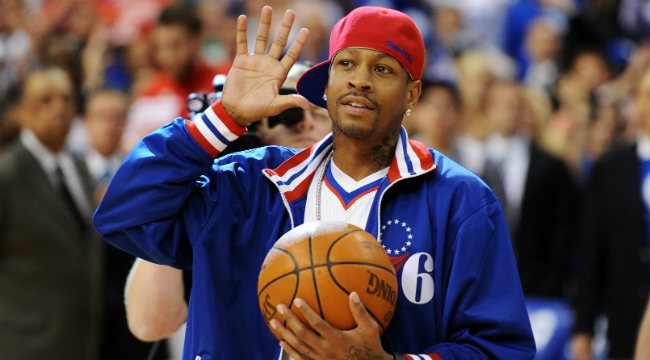 For all the labels that have been slapped on Allen Iverson over the years, fairly or unfairly, few have been so bold as the ones he’s given himself. He called himself the best player in the world, and now that his former coach Larry Brown is endorsing him for a front-office job with the 76ers, he’s calling himself a “basketball genius,” as reported by the Philadelphia Inquirer.

“I may not know everything about physical talent or anything like that, but I have a sharp mind when it comes to that look, being able to look into somebody’s eyes to tell if they are going to be in the foxhole with you tonight or if they are not,” Iverson said Thursday night. “To me, I am a basketball genius and I really believe that, so at any capacity I could help this franchise, that is what I am going to do, whatever they ask me to do.”

I can’t say whether or not Iverson is a basketball genius, or if he would be good in the Philadelphia front office, but I can say that after Brown took his (apparently months-long) campaign for Iverson public, he pretty much guaranteed it wouldn’t happen any time soon. When’s the last time a person outside a sports organization took to the media to pressure that organization into a personnel decision and it actually worked?

Larry Brown used his suggestion of Iverson for front office (which he knew would draw media attention) to criticize Sixers GM Sam Hinkie and his analytically-minded front office, which isn’t the best way to get someone to listen to you. Beyond that, Iverson said that his “genius” resides in a guru-like emotional intelligence, or even a mystical sense of the “it” factor that’s so difficult to define. While that’s certainly a useful quality, it’s still out of step with Hinkie’s philosophy.

AI, I love you, and Larry, I respect you. But this has all the appearances of a mistake, and Hinkie isn’t liable to capitulate on giving Iverson a job just because both former Sixers stay in touch with Philadelphia Inquirer writers.