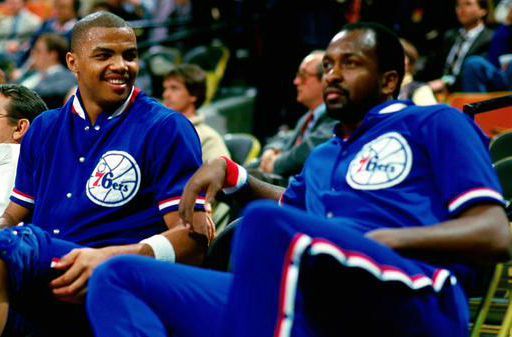 Whether you like what he has to say or not, Charles Barkley always speaks from his heart. When it came to eulogizing his mentor, NBA Hall of Famer Moses Malone, at his funeral, this may be the most emotional side of Charles that you will ever hear and see.

The “Round Mound of Rebound” gave a riveting speech about entering the league as a rookie with a staggering 300-pound weight. He addressed how “The Chairman of the Boards” took him under his wing when they were teammates on the Philadelphia 76ers, giving Barkley his wisdom about how to enhance his diet, discipline, work ethic, and understanding the game of basketball beyond relying on athleticism alone. Barkley also mentioned being melancholy for the fact that he can’t call Malone by his personal nickname for him, “Dad,” any longer now that he is deceased.

The 10-minute speech is edited for Barkley’s occasional explicatives (how appropriate at a funeral in a church setting, Charles!), but it gives you an idea of  how dedicated to the game of basketball that Moses was, and why Charles credits Big Mo for that passion he applied to his style of play in his own playing career. You can see the speech here:

Malone, a 12-time All Star, 3-time NBA MVP, and prolific scorer who holds the number 8 spot on the NBA all-time scoring list, was the first-ever selected high school player drafted by a professional basketball team in 1974. He also helped lead the Sixers to the 1983 NBA title.