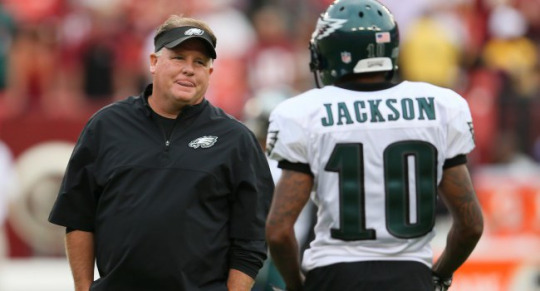 Much has been made this offseason of Chip Kelly’s relationship with black players in the locker room. Players exiting Philadelphia have made a point about mentioning Kelly’s issues. And while players come and go from organizations all the time, rarely do several players make a concerted effort to highlight a coach’s deficiency in relating to them after they walk out the door. Chip Kelly may not be a racist, but he’s definitely rubbing guys the wrong way.

On First Take, Stephen A. Smith revealed information through a former player that the Eagles coach instructed all of his players to wear monitors that measure their sleeping patterns, their alcohol intake, and somehow, their frequenting of nightclubs. There’s tons of research suggesting that sleep deprivation affects athletic performance. And Kelly is known for his obsession with perfecting heath and nutrition regiments for his players.

However, Stephen A. brings up a salient point on the racial history behind black players wearing monitors. If Kelly’s relationship with players in the locker room is on the rocks, forcing players to wear monitors can only exacerbate the issue. Kelly’s intent may be completely innocuous, but wearing a monitor of any kind is invasive and could be jarring for anyone carrying the weight of racial history in this country.

Stephen A. blows a lot of hot air on First Take, but he does have strong relationships with players around the league. There’s credence to this story if he’s decided to shed light on it. There may not be a fire in the Eagles locker room, but smoke is billowing out the chimney.