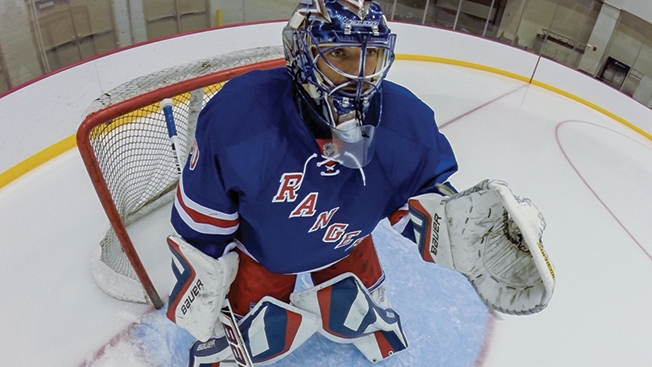 In the ever evolving world of making at home viewing a better seat than actually witnessing a game in person, the NHL has partnered with GoPro to present live game footage utilizing their HERO3+and HERO4 cameras. According to the official press release, “GoPro’s Professional Broadcast Solution, developed in a partnership with Vislink, will deliver live HD points of view and will debut during the 2015 NHL All-Star Weekend, which will be held January 23-25 in Columbus, Ohio. GoPro cameras worn by players will deliver real-time HD content and multiple angles and views to bring viewers even closer to the action on the ice for the 2015 Honda NHL All-Star Skills Competition.”

“This partnership marks a significant first step for GoPro into team sports, made possible because of NHL and NHLPA’s progressive thinking,” said Todd Ballard, Senior Director of Lifestyle Marketing at GoPro. “Together we will push the boundaries of video content production in hockey and provide fans of the sport with unique, immersive perspectives of the game that they’ve never seen before, from players and officials to in-goal and rink side.”

While there’s no word on how or if GoPro footage will be used during regular games/playoffs, one can deduce that if GoPro can once again make their technology smaller, there’s real potential for new POV’s during games that count on your record.