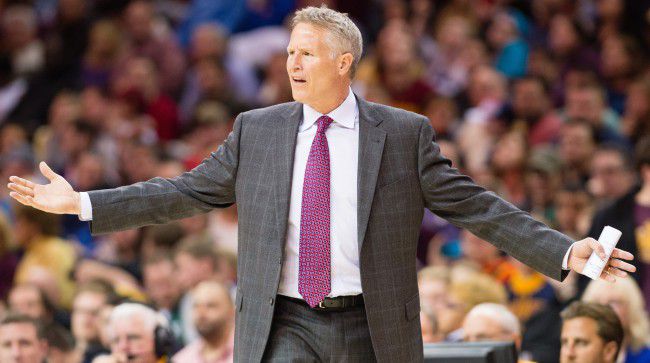 Brett Brown has been forced to deal with sub-par NBA rosters for three seasons as coach of the Philadelphia 76ers. The team’s front office, led by GM Sam Hinkie, has engaged in the controversial “process” of eliminating most competent veterans in favor of a young, unproven roster and future draft picks. The “process” has resulted in a paucity of wins, which is what it’s designed to do.

Fresh off of the team bringing in Jerry Colangelo this week as a “special consultant,” the Sixers have recognized Brown’s work in keeping the team afloat during that time period by granting him a two-year contract extension, per Yahoo’s Adrian Wojnarowski.

Philadelphia is only 1-22 this season after winning 18 and 19 games respectively the past two seasons under Brown’s watch, but you can hardly blame the former Spurs assistant for the Sixers’ struggles. An injury to Joel Embiid has turned an already-depleted roster even worse, and the team traded away emerging point guard Michael Carter-Williams during Brown’s reign; although, if MCW’s play in Milwaukee is any indication, maybe Brown and Hinkie spotted something ROY voters missed.

And even when Philadelphia seemed to draft a young player with serious potential like Jahilil Okafor, he spend his first quarter season like a home schooled kid in his first year at college. It’s gotten so stressful at times for Brown, that the team’s fans came together to try and get the coach a well-deserved relaxation package.

Although it’s highly doubtful Brown will be relaxing much with his team on pace to have the worst win-loss record in NBA history, at the very least he knows his job is safe for the next couple of seasons. For his sake, we hope he’s eventually provided a legitimate NBA roster during that time period.