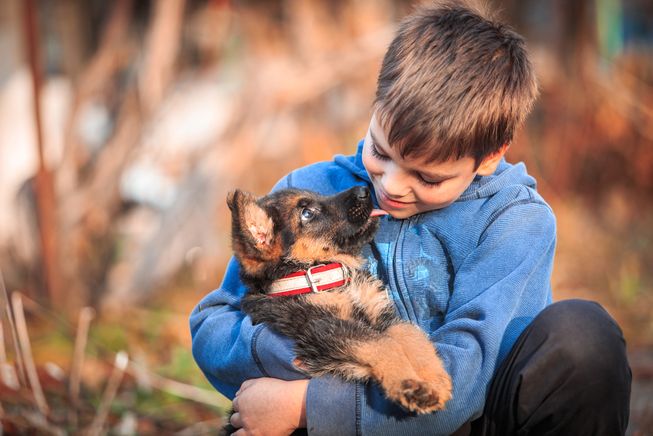 Children who grow up with pets reap a variety of benefits. Studies show they have reduced rates of allergies and asthma, and they’re more compassionate and emotionally intelligent. And recently, researchers discovered yet another benefit to having pets in the home: They may reduce childhood anxiety.

They found that while BMI, physical activity and screen time didn’t differ among children with or without dogs, those with dogs scored lower on clinical measures of anxiety. Twenty-one percent of kids without dogs met the clinical threshold to be screened for anxiety and other disorders compared with 12 percent of children with pet dogs.

When asked what kind of anxiety their children displayed, parents detailed several types that researchers say dogs can help alleviate.

What is it about dogs that helps reduce childhood anxiety?

According to Dr. Anna Gadomski, one of the study authors, a pet dog can serve as an icebreaker and stimulate conversation, which helps relieve anxiety. Pets also provide comfort and companionship, which can be especially beneficial for children.

“From a mental health standpoint, children aged 7 to 8 often ranked pets higher than humans as providers of comfort and self-esteem and as confidants,” the authors wrote. “Animal-assisted therapy with dogs affects children’s mental health and developmental disorders by reducing anxiety and arousal or enhancing attachment. Because dogs follow human communicative cues, they may be particularly effective agents for children’s emotional development.”

But are dogs the only pets that can provide such benefits?

Gadomski says not necessarily, noting that her team looked at dogs simply because there’s already so much research on man’s best friend.

“It doesn’t mean that cats can’t do the same thing,” she told NBC News.

So if you’re a parent, here’s the bottom line: Your kid’s argument to get a puppy just got a whole lot stronger.