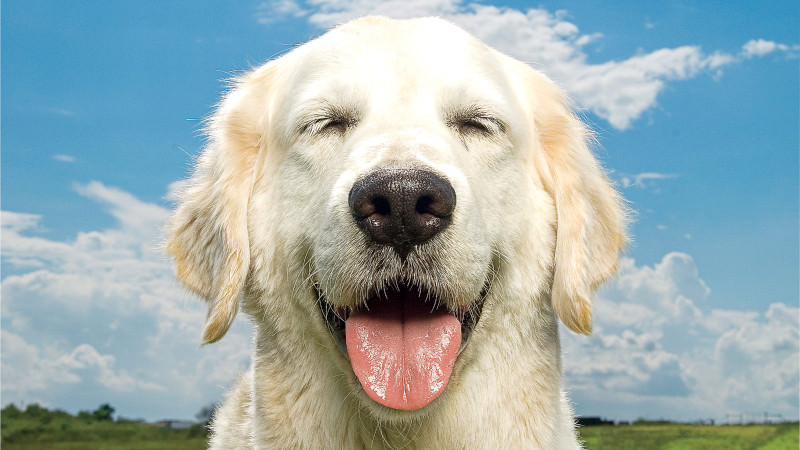 Human happiness is a shabby thing compared with a dog’s. For eons, humans benefitted from the canine gift for happiness and favored happy dogs, who thus passed along their happy genes, producing a species that is now besotted, almost deranged, with happiness. Of course, many other animals take pleasure in being alive—eagles soaring, otters skidding down slides, cows content to the point of smugness. But there’s a selfishness to that happiness. Dog happiness always looks outward. To reach fullest expression, a dog’s happiness has to be lived large and strewn around. The only thing that slows down a dog’s happiness is if he can’t infect you with it so you can be happy together.

And dogs laugh! Not only do they laugh, they mean it, unlike such sarcastic types as monkeys, hyenas, and dolphins. (I know dolphins are friendly, but that high-pitched chuckle of theirs can wear on you.) A dog will laugh at anything. Hiding the ball, then pulling it out of your coat—hilarious! Watching you load the car before the vacation—a riot! Dogs are like an audience someone has already warmed up so that they laugh and voice their approval the minute the featured act (you) steps onto the stage. Dogs laugh even when they don’t get the joke, which is often. But hey, if you’re laughing, it must be funny, and that’s good enough for them.

To understand the sense of humor dogs have, it’s useful to contrast it with that of their main pet competitor: cats. Cats do not really have a sense of humor. In its place, they cultivate a deep sense of the ironic. The detached, ironical pleasure cats take in watching and inflicting suffering is a horrid substitute for the hearty wholesomeness of dog laughter. And a cat never laughs out loud. The best that cats can muster is a sardonic smirk, an “I told you so” bared in their pointy incisors.

Dogs laugh just as hard when the joke is on them, but cats hate being the butt of laughter. One time my cat was asleep on the mantelpiece in the living room. In his sleep, he turned over, woke up, found himself lying on empty air, and began scrabbling frantically on the mantel with his front paws to keep from going down. Cartoonlike, he lost the struggle and dropped to the floor. I saw the whole thing and laughed my head off. Only the cat’s dignity was injured, but he never forgave me, for the course of his half-hour memory span. He slunk around and shot me dirty looks and was really a bad sport about it, I thought. A dog would’ve made that same pratfall and hopped back on the mantel and done it again just for laughs.

Best of all, dogs live to go outdoors, where they find their funniest and timeliest material. They want to show you that running fast to nowhere in particular and then back, muddy and burr-covered, is such great comedy that you ought to join them in guffawing and jumping around with your tongue hanging out. They invite you to follow them to the railroad tracks and the run-over opossum that will be a good joke for them to roll in, or to the Canada geese on the baseball field, where a side-splitting chase scene will ensue. The bits are somehow even funnier because the dog is confident that you will love them as much as he does.

Dogs exult in the world itself. No matter if your neighborhood is interesting or not, your dog will want to go out in it. This is a godsend for human beings, most of whom would otherwise vanish into their screens. When I ramble around the part of New Jersey where I live, I see very few people on the sidewalks, and blue glows in many windows. The actual world has been abandoned for the virtual one—but not by dogs. They lobby for the world’s reality and the unending comedic opportunities it provides. The only other humans I see on my rambles in the worst weather are the ones who have to walk their dogs. Dogs never stop showing us that gigantic happiness inheres in the world, waiting to be run to earth or sniffed on a tree.