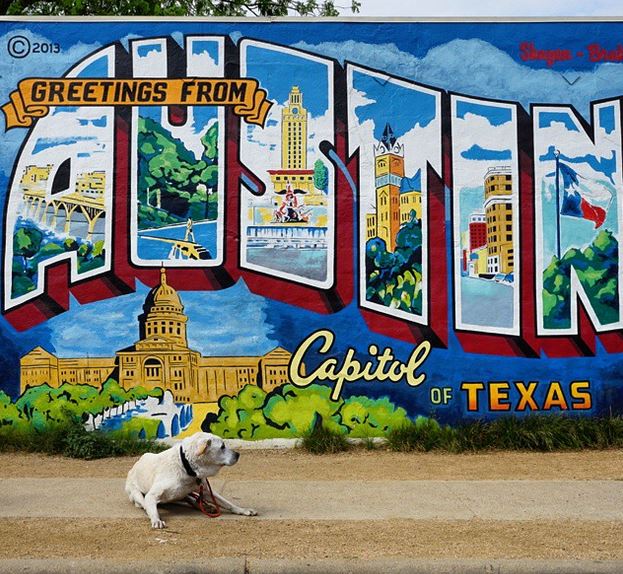 When DJ Thomas Neil Rodriguez learned earlier this year that his 16-year-old dog had only weeks to live, he was devastated.

He’d adopted Poh as a puppy from a New York shelter in 1999, but the once-healthy pit bull-lab mix now had numerous tumors as well as kidney failure.

“They were like, we can’t tell you [how much time he has left] but you could have days. He could be gone any day,” he told New York Daily News.

Rodriguez had a gig scheduled in Arizona in March, but he wasn’t about to leave Poh alone for what could be his final days. So he and his fiancée decided to embark on a road trip and cross items of Poh’s bucket list.

Poh, who requires a daily IV drip, was photographed in front of numerous U.S. landmarks along the way, and when the family arrived in Arizona, Rodriguez decided to continue their road trip.

Since then, Poh has traveled thousands of miles and been photographed in more than 35 U.S. cities. He has dipped his paws in the Pacific Ocean, posed in front of the Alamo and had his belly rubbed on the National Mall.

Now, Poh is back home in the Big Apple, but his urban explorations continue. Take a look at his Instagram page, and you’ll see Poh visiting Coney Island, the Brooklyn Bridge and One World Trade Center.

Rodriguez says he’s blessed to have spent months with Poh instead of the few days he thought he’d get when his pet received a terminal diagnosis.

“I am super blessed that I have actually gotten to do this,” he said. “People think I take care of Poh, but Poh takes care of me.”

Take a look at some of Poh’s adventures in the photos below.