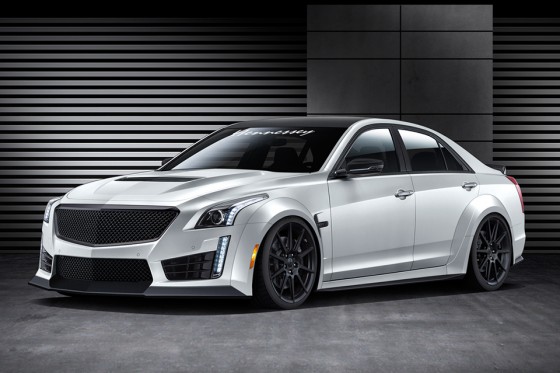 Cadillac set the automotive world on fire when they announced that the new CTS-V would be pumping out 640 horsepower, with a top speed of 200 mph.

For most people, that kind of power would more than suffice, but Hennessey Performance isn’t most people. The car customizers at Hennessey decided to turn things up a notch building the 1,000 horsepower 2016 HPE1000 Twin Turbo Cadillac CTS-V.

So how did the mad men create such a powerful 4-door? The crew kept the 6.2-liter V8, but ditched the factory supercharger in favor of a twin turbo-charger setup. The goal is to hit 240 mph, and be crowned the world’s fastest four-door sedan. The vehicle is also outfitted with a wide bodykit, larger wheels and a set of carbon-ceramic brakes on all four corners. Only 24 HPE 1000s will be produced, and with specs like this, we imagine they will have no problem selling out.