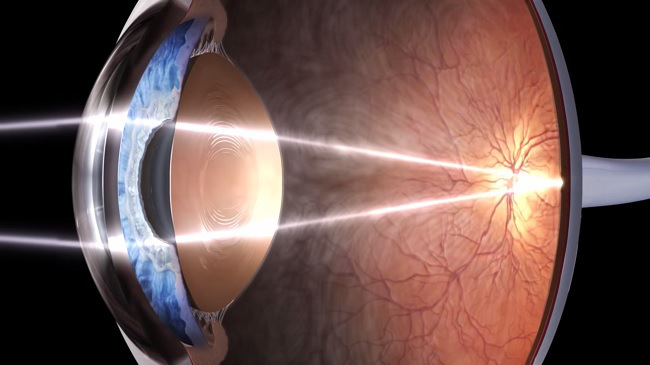 The human eyeball is kind of incredible, being able to see millions and millions of colors, automatically adjust to light conditions, and, in camera terms, it contains about 50 f-stops of capability. Light enters our eyes and falls on photoreceptive proteins in our retina (the rods and the cones). From there, information is sent to the brain via the ganglion and bipolar cells behind the rods and cones. Your brain adjusts the changing information from your eyes — like when you’re using color filters (tinted sunglasses) — almost imperceptibly.

In degenerative diseases of the eye like retinitis pigmentosa or macular degeneration, the rods and cones are destroyed, leaving one in four sufferers legally blind. However, the messenger cells stay mainly intact. That’s what scientists are hoping will make experiments they’ve been doing with channelrhodopsin-2 — a light-sensitive protein found in green algae — succeed in patients with retinitis pigmentosa. The channelrhodopsin-2 can be placed into the retina with gene therapy, bypassing the rod-and-cone system and allowing ganglion cells to sense light on their own.

The experiments began in 2006, when Dr. Zhou-Hua Pan, a researcher at Wayne State University, put the protein into blind mice, and it worked to restore their vision on the first try. Several years later, RetroSense Therapeutics leased the research from Pan in order to start human trials. And last month, the FDA approved. Clinical trials will begin on 15 patients by the end of the year.

But the process may not be a total restoration of vision. The ganglion cells aren’t necessarily made to detect light, only process signals. The channelrhodopsin-2 protein is 2,000 times less sensitive than fully-functioning rods and cones. So, even with the protein helping, there may be some color blindness. The protein is usually only responsive to a narrow range of wavelengths.

The brain might make adjustments, though. That is part of what remains to be discovered about the process by testing it on human subjects. And as early as 2016, science could have a cure for people suffering from failing vision.