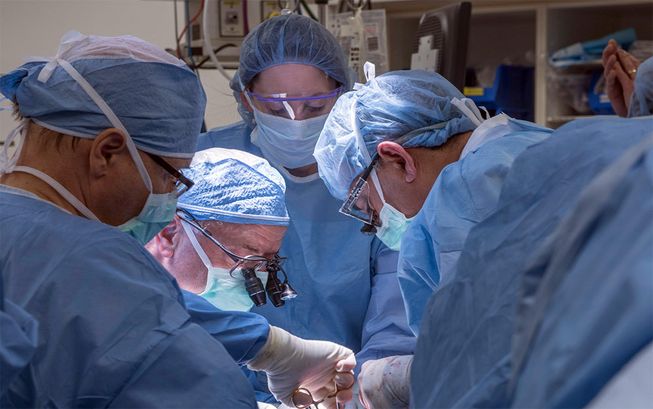 During a 9-hour surgery performed by Cleveland Clinic transplant and gynecological surgeons on Feb. 24, a 26-year-old woman received the first uterus transplant in the United States. The womb came from a deceased organ donor. This procedure marks an important milestone for fertility medicine and could help women born without a uterus or those who had to have it removed to regain the ability to become pregnant.

The clinic released a statement saying that the woman was in stable condition on Thursday afternoon. Her next step is to wait at least a year before attempting to become pregnant to make sure that everything heals properly and that her body doesn’t try to reject the new organ.

Before the procedure, some of the woman’s eggs were removed surgically and fertilized with her husband’s sperm. If all goes well during the year, these already-fertilized eggs will be transferred back to her new womb for what will hopefully be a successful pregnancy. She will be monitored closely by a team of high-risk obstetrics medical professionals.

One thing that is special about this situation is that the transplant will be a temporary procedure on purpose. The real goal is to have children, not a uterus, so it will be removed after one or two babies are born (it’s up to the couple) so that there’s no need to take anti-rejection drugs — which can have harmful side-effects — and so that other potential long-term complications of the transplant are avoided.

The research team, which is comprised of transplant specialists, obstetricians, gynecologists, bioethicists, psychiatrists, nurses and social workers, is continuing to screen for transplant candidates that are inflicted with uterine factor infertility (UFI), an irreversible condition affecting 3-5 percent of women worldwide.

“Women who are coping with UFI have few existing options,” said Dr. Tommaso Falcone, chairman of the Department of Obstetrics-Gynecology at Cleveland Clinic. “Although adoption and surrogacy provide opportunities for parenthood, both pose logistical challenges and may not be acceptable due to personal, cultural or legal reasons.”

The hospital’s ethics panel has given permission for uterus transplants to be performed 10 times as an experiment. After that, the panel will decide if the procedure can become a more routine one or if it’s still too experimental.

According to the New York Times, there are around 50,000 women in the United States that could be candidates for uterus transplants.

There have been other uterus transplants performed elsewhere around the world. The major milestones include a 2000 transplant in Saudi Arabia from a living hysterectomy patient to a 26-year-old recipient. The transplanted uterus functioned for 99 days, but had to be removed due to too much blood clotting. In Turkey in 2011, the world’s first uterus transplant from a deceased donor took place. The recipient was a 21-year-old woman born without a uterus. Unfortunately, she was not able to have a baby.

The biggest success in the field so far comes from Sweden. In 2012, the first mother-to-daughter transplant was performed, leading to the birth in 2014 of a baby boy. He was born prematurely by cesarean section, but he lived, and his life wouldn’t have been possible without the dedication of a pioneering medical team.