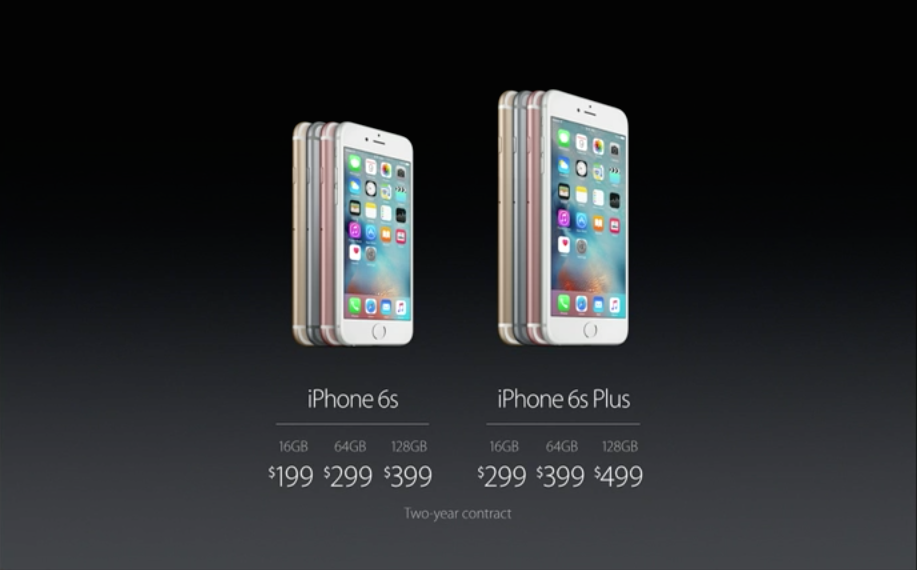 After a long lead up filled with predictions, leaks, and an unhealthy level of attention, Apple CEO Tim Cook took the stage Wednesday to show us the new devices we’ll all learn to love (or loathe, for the Android crowd) over the next gadget lifecycle. It was an event filled with surprises (Microsoft shelling an Apple product?!), but most of all, fulfilled expectations.

Here’s everything you need to know about Apple’s latest generation of products, including the Apple Watch, the iPad Pro, the new Apple TV, and (of course) iPhone 6s and 6s Plus.

First up was the Apple Watch. While there won’t be any real hardware updates for the flagship wearable — it only launched back in April, after all — there were a few peeks at the upcoming WatchOS 2, which drops on September 16th. We saw updates to in-suite apps like Maps, which adds public transit information, a nifty Time Travel feature to check out your calendar with the watch bezel, and a demo of Airstrip, an app that streamlines doctors’ communication with each other and patients.

Along with the software, there are new accessories coming for the Watch, featuring a special collaboration with Hermes for the Apple Watch Hermes leather bands, which will be available in October. Two new colors of the Watch, Gold and Rose Gold anodized aluminum, are available starting today, along with new Apple-branded sport bands and a stainless steel Product RED Edition.

“The clearest expression of our vision of the future of computing.”

Things really got going when Tim Cook took to the stage with the new behemoth iPad Plus, calling it “the biggest news in iPad since the iPad.” In many ways, that seems to be the case. The new 12.9-inch tablet (which is remarkably close to thickness and weight to the original 9.7-inch iPad) brings a ridiculous number of performance highlight stats to the table, including a display better than a 15-inch Macbook Pro’s, faster speeds than 80 percent of portable PCs that have shipped in the last 12 months with its A9X chip, and a 10-hour battery life. Add that to new features like four speakers for stereo sound and new dual-screen multitasking capability with iOS9, and you’ve got an entertainment and productivity powerhouse that will rival any laptop on the market.

And then they started talking about the new accessories.

First, they trotted out the Smart Keyboard, a specialized keyboard accessory that integrates seamlessly to the Pro. It doesn’t look extremely special — kind of like a plus-sized Microsoft Surface.

But the second accessory looks like a true game changer. The Apple Pencil, the long-teased stylus (that never would have happened with Steve Jobs in charge), allows for seamless use for more detailed sketching on your tablet — the multitouch system senses twice as many contact points when it’s in use. Apple’s biggest rival Microsoft even sent a rep to demo the device in the iOS Office suite, something unthinkable with Microsoft’s own Surface tablet out on the market. Along with Microsoft, Adobe, which is releasing a full package of software for the new Pro, gave us a look at what the pencil can do. From what we’ve seen, that’s just about anything you can imagine.

“The future of TV is apps.”

The overhauled Apple TV then took the stage. The real draw of the new tabletop streamer — which didn’t add the long awaited cord-cutting subscription cable service — is how it will work more like your other Apple devices, complete with Siri connectivity, who will finally save you from having to answer all of your girlfriend’s questions when she zones out during a movie. All of the streaming options you already know and love from the current iteration of Apple TV and other streaming devices are supported, running on the new tvOS.

The game changer here is the new remote — for starters, it runs on a three-month charge and Bluetooth, so you’ll never have to worry about something obstructing the sensor again. It works like an overhauled Nintendo Wiimote, with both touch screen control and motion sensing capabilities that open up the Apple TV to the home video game console space. Several Apps were demoed, and, although it might just look like a next-gen Wii for now, it’s only just the beginning.

“The most loved, most advanced smartphones in the world.”

Finally, the main event: iPhone time. Immediately, the new Rose Gold color (which was anticipated, then dispelled) was presented, followed by a torrent of new specs, including:

With all of these impressive new improvements, several new features really stood out.

We’d been expecting this new feature, just under a different name (ForceTouch). Essentially, along with the swipes and scrolls you’ve gotten used to with the Multitouch Screen, you’ll now be able to use different levels of pressure to “peek” and “pop” in and out of your apps, adding an extra layer of control to the already incredibly user friendly OS (although the inclusion of the “Emergency Selfie” feature has me wondering if we haven’t gone too far over the edge).

The cameras — both back- and front-facing — took major steps forward with the 6s, jumping to 12 MP and 5 MP, respectively. The autofocus on the back camera has been retooled to compensate for twice as many pixels as the previous generation’s and uses a TrueTone flash, while the front-facing camera now features a Retina flash to improve front-facing photos. The HD video recording now supports 4K.

Do you love GIFs? You’ll love Live Photos. Every picture you take will now have the ability to move. Every time you take a photo, the camera ​captures a second and a half on either side of the image — and sound. When you press on any of your photos, you’ll have a moving, vocal snapshot of the moment you were capturing. All Apple devices will be able to support the Live Photos, with the Facebook iOS app adding support within the year.

While several other payment plans were outlined — including the “iPhone Upgrade Program,” which will let consumers upgrade devices every year for $32 monthly payments — the two-year contract pricing structure for the 6s and 6s Plus remain identical to the last generation’s. The 6s starts at $199 for 16GB, moving to $299 for 64GB and $399 for 128GB. The 6s Plus is pricier, with $299 for 16GB, $399 for 64GB, and $499 for 128GB. The new phones (which, along with the iPad Pro will run on iOS9, launching September 16th) will be available for pre-order starting September 12th, with the official launch beginning September 25th.