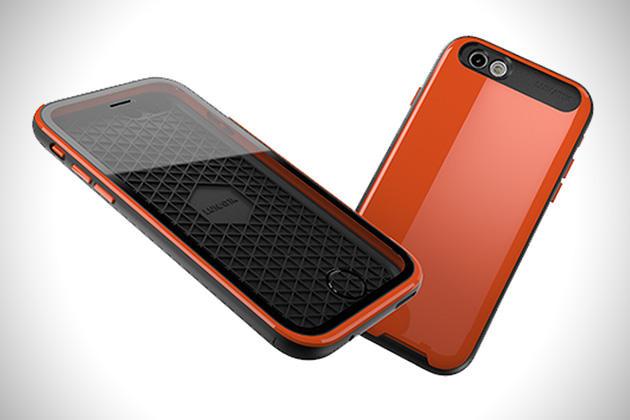 One of the biggest cries of Apple fanatics is that the company follow in the footsteps of Sony and make their phones waterproof so that if you are opening the box in a running shower, it won’t immediately die. As they have in the past Apple has ignored these pleas when they made the iPhone 6 and the iPhone 6 Plus and created yet another device that you can’t drop in the toilet. To fight back against their lack of foresight, and protect your device come rain or shine, you’ll need to get a waterproof case.

The first thing to be aware of when purchasing a waterproof case for your iPhone 6 is the testing process. Some companies will claim their product is waterproof, but one submerged selfie will show their lies. After verifying it is truly waterproof, you need to make sure it is easy to use and doesn’t block off certain parts of your phone. It’s a common practice to create waterproofing merely by closing up any opening on an iPhone. Yes, it is waterproof but you’ll never be able to operate it. Considering both of these factors, we found the 5 best waterproof iPhone 6 cases. 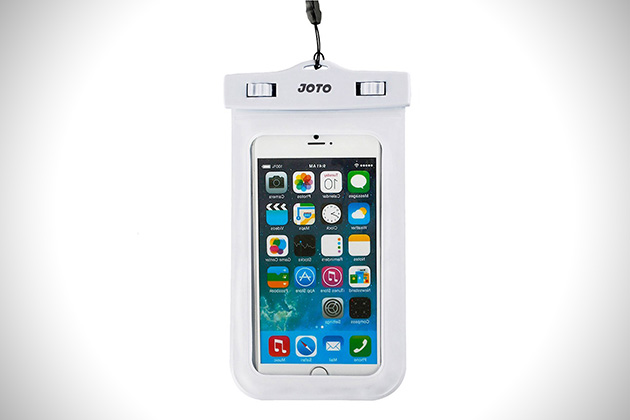 Pro: Doesn’t interfere with camera
Con: Hard to use side buttons

Beach Bum: Ordinarily waterproof cases that seem to be little more than baggies aren’t enough to get us excited, and indeed this isn’t anything special, but rather it is a well developed form given the limitations inherent to it. Clear sides allow for shooting video and pictures underwater while the lean price tag makes it attractive for those who only want a case that can keep their phone free from sand and water intrusion during those times when they want to lounge by the pool or go to spend a day swimming with the dolphins. This can accommodate devices as large as 170mm x 100mm (approximately 6.5″ x 4″) and has a convenient lanyard for carrying around the neck or on the wrist. Though the bag keeps out moisture, interfacing with a touchscreen is easy and visibility isn’t compromised in the slightest either looking into the bag or shooting out of it. The snap and seal top is easier than a Ziploc bag to operate and ensure a tight seal every time. Just don’t expect to be able to reach any of your ports once it’s locked away. Does work with the Touch ID fingerprint scanner. 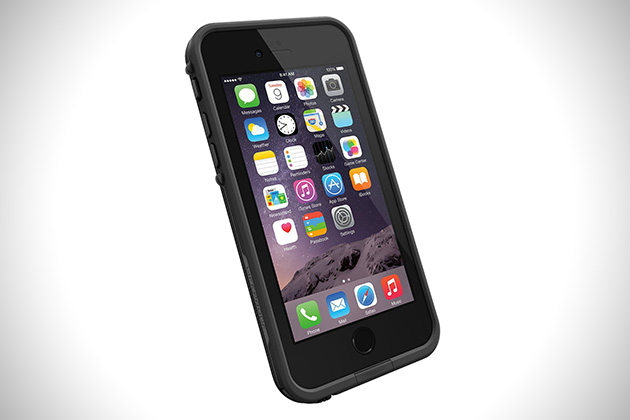 The Omega: Lifeproof is held up as the platinum standard when it comes to cases that can battle the elements, and this model for the iPhone 6 is no exception. First off, it doesn’t add much bulk to the slim lines of the iPhone 6, but don’t let that trim figure fool you. It is rated at IP-68 for ingress protection against dust, dirt, grit, snow, rain, and whatever other fluids you are throwing at it. For being dropped it holds a MIL STD 810F-516 certification which is designed by the military to find products that can meet or exceed the needs of soldiers in the field. This is good enough for the SEALS, making it more than enough for you. It can go as low as 2 meters (approximately 6.6 feet) for an hour without difficulty. The screen cover is hardly noticeable during use and all the ports are easily reachable with standard connectors. Adapters won’t fly with this, so if you have a USB to Lightning or other aftermarket plugin, you’ll need to get rid of the case to use it. Can also be dropped, kicked, bumped, and scratched without losing its integrity. 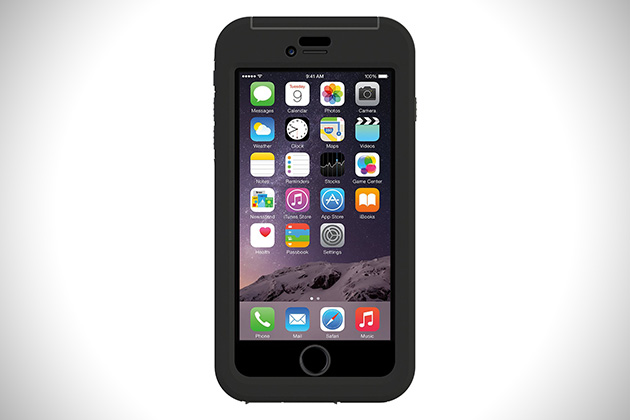 Pro: Works with iPhone 6 Plus
Con: Adapter plugs are difficult to pull out

Workout Wonder: This might be our favorite case for the iPhone 6 Plus, period. Lovers of the larger phones have largely been marginalized by case makers who think that just because you prefer a phablet – a word we hope never to use again – you shouldn’t have quality waterproofing. The Obex has waterproof cases for the garden variety, but they shine brighter on the larger iPhone 6 models. With the IP-68 consumer rating you know you’re protected against dirt and water but it also comes with the MIL STD 810F-516 military shockproofing stamp of approval. It has a low profile that isn’t heavy or troublesome and looks damn good, especially with the included clip which is convenient when you need to put in your workout headphones and pump iron. Though the waterproofing is amazing, there are other problems with this case that could be dealbreakers for you. The tabs for the jacks can be hard to extract from the body,and for all the environmental protection this offers, it isn’t nearly as stalwart when you drop it. It won’t break but can crack open if not secured properly. 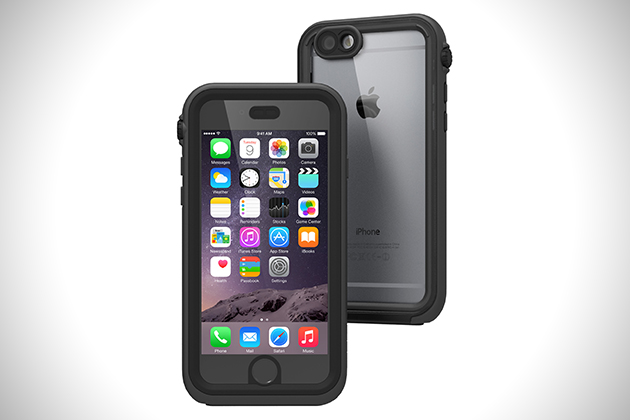 Pro: Clear front and back with easy-grip rubber sides
Con: Not human so you cannot legally marry it

Unbeatable Style: Savvy consumers don’t want to spend money on a new piece of kit only to stuff it into a case that is going to hide it away from the world. What good is having the newest, hottest thing if you can’t rub it in people’s faces? Thankfully Catalyst has managed to make a waterproof iPhone 6 case that not only works well, but lets your device stand up and show off. At 11.4mm it has a barely there feel while clear front and back panels show that yes, you’re among the true Apple fans. Like others it bears the IP-68 certification against water and dust invading it and the MIL STD 810F-516 proving it can also take a hit. This can go as low as nearly 16 feet for about an hour before seepage could occur. On the outside is a knob for your mute function and a single rubber piece to protect your bottom jacks. You don’t lose any function and the rubber grip exterior grabs on like a set of waterproof boots for easy, comfortable holding.

Coming Soon: One of the most anticipated waterproof cases for the new iPhone is the Lunatik Aquatik – a true adventurer’s iPhone case with the ability to take more punishment than anything else on the market. It is their thinnest case yet and will come in multiple colors for those who like to pimp their devices, though only black is on the block for pre-order. With regard to waterproofing it does have the all-important IP-68 rating. For protection the case has a latticework that distributes any force around the phone and increases the overall solidarity of the case as a whole. The front will be pure Gorilla glass for better impact resistance on the screen. Only tough hombres who have lost several phones to damage will really need to pay the extra money for this, but if you tend to drop, dip, or smash your devices, the extra cash might be worth it. 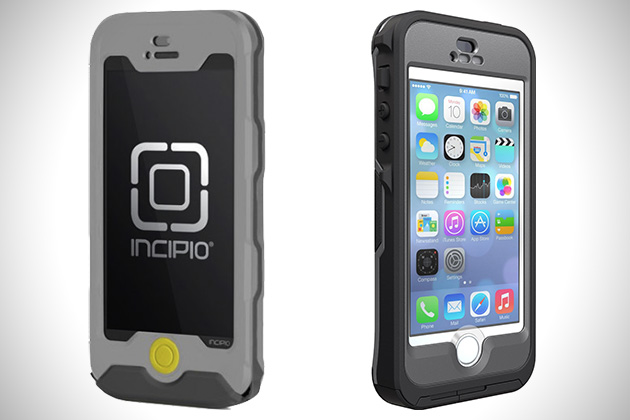 Rumored Releases: If you can hold your breath, there’s still some offerings coming from the popular Atlas line from Incipio and OtterBox has said that even though they have the Lifeproof models on the market, they will also be releasing a case from their Preserver line that will outshine the slightly more basic frē and nüüd models by adding even greater protection, more features, and the ability to float. The Atlas case is likely to be an upgraded version of the iPhone 5/5S cases of the same name.