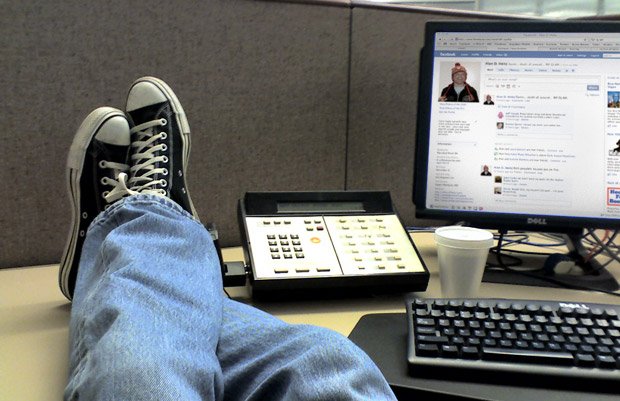 A new study by Matthew McCarter, associate professor of management at The University of Texas at San Antonio (UTSA), looks into the bane of managers in nearly every industry: employees slacking off by excessively surfing the Internet, an activity known as cyberloafing.

“Leisure surfing can be helpful,” McCarter said. “It relieves stress and can help people recoup their thoughts, but cyberloafing is different. That’s when people are supposed to be working and are instead surfing.”

Cyberloafing costs hundreds of millions of dollars in lost productivity in the United States annually.

“What’s happened now, with the advent of the Internet, is that it’s nearly impossible to keep people off the Internet at work because of mobile devices,” he said. “Getting people to stop cyberloafing is the big thing management is worried about.”

McCarter, an expert in managerial decision making in the UTSA College of Business, notes a study that found that British workers were being interrupted by Twitter and Facebook notifications about every 10 minutes. It took the employees about 23 minutes to get back to work, costing their employers thousands of dollars each year.

He partnered with Brice Corgnet at Chapman University and Roberto Hernán-González at Nottingham University to determine the best methods of eliminating cyberloafing in a standard office setting. A group of 10 volunteers were given a mundane data entry task, and were overseen by a manager, also a volunteer. They were paid the standard for a data processing clerk, but also given a bonus resulting from how much work the workgroup was collectively able to accomplish. At any time, the workers could click on a button and go surf the Internet instead of entering data.

Some people never left their work while others left their work right away. Still others went back and forth between working and online surfing. Overall, about 14 percent of the workers’ time was spent cyberloafing.

McCarter and his fellow researchers tried two different methods to stop cyberloafing. The first was an autocratic decision process, wherein the manager simply turned off the Internet access. This stopped the cyberloafing, naturally, but didn’t necessarily cause an uptick in productivity. The cyberloafing subjects, in spite, often just stopped working and would even stare at the ceiling until the day was over.

The second method allowed the group to vote whether to turn the Internet off. Ninety percent of the time, the group agreed to cut off the Internet. In this instance, the subjects who had previously been cyberloafing increased their productivity by 38 percent. As time went on, the former cyberloafers were equally as hard-working as those who had stayed off the Internet.

“In group voting, you strategically give your workers control over something,” McCarter said. “By giving them a voice to stop an unproductive behavior, not only did a strong majority agree to stop cyberloafing, but those who had been cyberloafing (and even who voted against turning off the Internet) redeemed themselves by contributing to the team and working just as hard as the others.”