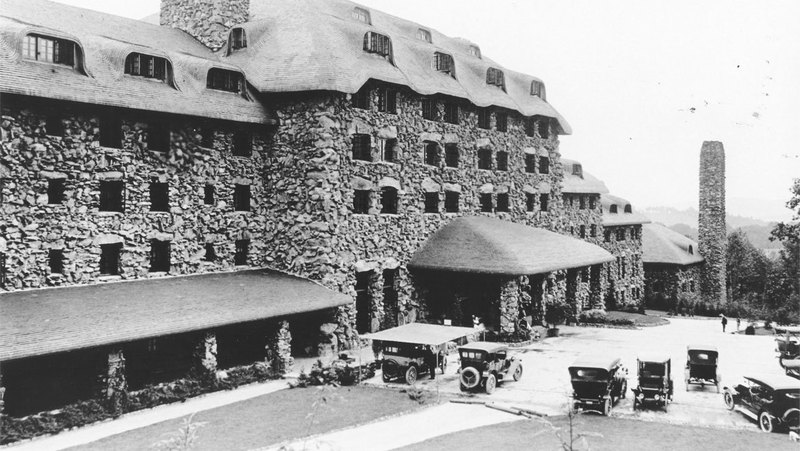 In Asheville, North Carolina there’s a 102-year-old hotel that looks like a stone castle, built from granite boulders transported from nearby Sunset Mountain by mules, wagons, and ropes. During World War II, it served as a prison for Axis diplomats, who were held at the hotel by the State Department.

Thomas Edison once stayed there, as did Helen Keller and Franklin D. Roosevelt.

But for many decades the Grove Park Inn (now the Omni Grove Park Inn) has been most concerned with a guest who was never famous–or even really known. Her name is the Pink Lady. She is a ghost.

The Pink Lady is not so much a lady as a mist. Or a fog. Sometimes she appears in the dead of winter, in the off-season when few people are at the hotel. She tends to appear early in the morning and late at night and when she is least expected. She is chiefly associated with Room 545, where past and present employees say they have felt her presence like a cold chill. Perhaps she stayed in this room long ago. Perhaps not.

“It’s not that she was wearing pink when she died–she just appears as pink,” says a man sitting in an armchair in the lobby. “Like a pink fog.”

It is not uncommon for historic hotels to claim to have a resident ghost. From the infamous Stanley Hotel in Colorado (Stephen King’s inspiration for The Shining to random Days Inn hauntings), it’s almost pro forma to brag of supernatural guests. A whole website exists to help you locate and book rooms at such places. Ghosts embody the past and suggest that the past persists in the present; they also authenticate old hotels. The nearby historic Lake Lure Inn is thought to be haunted by founder Lucius Morse, who died in 1946, as well as by the G.I.s who convalesced there after World War II.

The Grove Park Inn undertook an investigation into the phenomenon of the Pink Lady in 1996, but the stories about her span half a century. The hotel was built in 1913 by Edwin Wiley Grove, who made his fortune with Grove’s Tasteless Chill Tonic, a treatment for malaria that masked quinine’s bitter taste with iron, sugar, lemon flavoring, and alcohol. It was a household name by the late 1890s.

On a trip to Detroit, he befriended Fred Seely, another man in pharmaceuticals, who promptly married his daughter Evelyn and began working for his Paris Medicine Company. In the first decade of the twentieth century, when Grove began acquiring land to build a hotel on Sunset Mountain but found himself dissatisfied with all potential architectural plans, Seely drew up his vision for the inn, and Grove approved it.

Some of the boulders that make up the hotel’s cave-like walls weigh as much as five tons, an architectural ruggedness that connects it to the landscape. Builders were given the instructions that no cut stone should be visible: guests should see only “the time-worn face given to it by thousands of years’ sun and rain that had beaten upon it as part of the mountainside,” according to one brochure.

The Great Hall, or lobby, was decorated with 700 pieces of furniture and over 600 light fixtures of solid copper made by the Roycrofters of Aurora, New York. Over a dozen quotes from writers such as Ovid, Thoreau, and Emerson were carved into the stone. The huge, medieval-looking fireplaces at either end of the room burned 12-foot logs. An old photograph depicts women standing by the fire, their own forms blurred and ghostly.

Like many ghosts, the Pink Lady’s history is defined as much by gaps in the narrative as by tantalizing details. The legend is that a beautiful woman–perhaps dressed in a pink gown, perhaps not–fell to her death in the Palm Court, the interior atrium of the main historic hotel. The guest rooms line this open space, which is framed by low walls on each floor.

According to some of the stories collected in paranormal enthusiast Joshua Warren’s 1996 book Haunted Asheville, the Pink Lady is the embodiment of conventional femininity: beautiful, elusive, an enigma.

But others think of her as an outsider figure–a prostitute or a madwoman. One local man occasionally calls the hotel to insist that the Pink Lady is Zelda Fitzgerald, whose husband stayed in Rooms 441 and 443 for the summers of 1935 and 1936, drinking gin and trying to write. Zelda died in a fire in Asheville’s Highland Hospital in 1948.

Although the Pink Lady has been sought with contraptions worthy of Ghostbusters, she is more readily found in stories. Most of these tales emphasize her benevolence, but she is still disruptive: an unpredictable element in a controlled environment. At its inception, the Grove Park Inn was nothing if not controlled.

Seely managed the hotel according to regulations designed to cosset his guests. He made sure that no automobiles entered the property after 10:30 p.m. or before 9:00 a.m. Guests were requested not to run the water late at night. They were also discouraged from bringing young children. Signs in the historic elevators encourage guests to be quiet once they leave the Great Hall.

Early brochures even promise that cleaning is done by Sturtevant Vacuum Cleaners that are “noiseless.” It is precisely into this silent, rule-bound environment that the Pink Lady intrudes, violating the mandates that define this space of retreat. She wanders the corridors. She tickles your toes when you sleep. She does not obey the rules.

Guests and employees like to talk about the Pink Lady. They tend to say that she’s the spirit of a woman who died “in the 1920s” or “around 1920,” this uncertainty adding to the elusiveness of the legend. “She’s like a shadow,” says someone reading a newspaper by the fire.

“She’s strange but gentle,” says a guest at the bar. The woman at the check-in desk says that some visitors call and request Room 545, but others make it clear that they want to be placed as far away as possible.

My waiter in the hotel’s Edison Restaurant is sure she exists. He recalls strange events late at night, when he has been closing up. Once, a commercial-grade lock unlocked itself. The restaurant is part of the modern addition to the resort, so the Pink Lady’s purview extends from the old into the new.

“She turns lights on and off,” says a woman sitting at the next table, after he walks away. “Late at night.” The elevator operator says that everyone asks about the Pink Lady. On the walls of the fifth floor hang reproductions of old black-and-white photographs of the hotel.

Although the Pink Lady is primarily associated with the hotel’s interior spaces, the landscape beyond is also suited to a phantom. The Blue Ridge Mountains are characterized as otherworldly in early advertising materials. It is “the Land of the Sky”: the ideal location for a restless spirit.

Doormen open and close the hotel’s large main doors, letting in an evening breeze. Guests flow in and out, some dressed up for dinner and others still in their hiking clothes. Upstairs, it is silent: Seely’s dream. Someone must be staying in Room 545, since a Do Not Disturb sign hangs on the doorknob.

Perhaps historic hotels like ghost stories so much because ghosts are like guests: wandering and displaced. Restless. The Pink Lady is the ultimate hotel guest, the embodiment of travel itself. She will never leave.