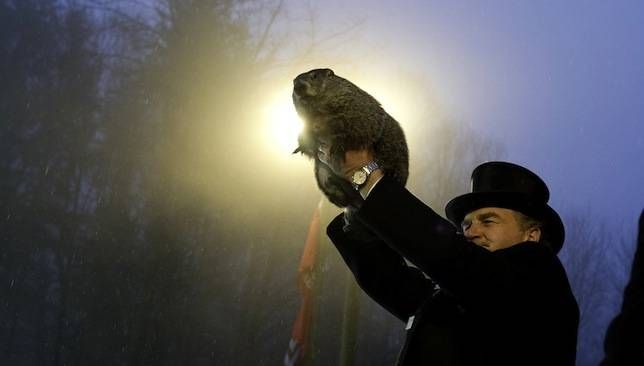 For one day each year, people across North America count on a network of groggy groundhogs to rise at dawn and issue a six-week weather outlook. It’s a popular tradition from Punxsutawney, Pennsylvania, to Vancouver, British Columbia, with crowds often braving bitter cold on Feb. 2 just to see the furry forecasters in action.

But why? How did such a strange ritual ever get started? And is there any truth behind groundhogs’ weather-predicting reputation?

Groundhog Day as we know it began around 1887 in Punxsutawney, but its roots go back hundreds and even thousands of years. The holiday has origins in the ancient Celtic festival of Imbolc, which was held Feb. 1, halfway between the Winter Solstice and the Spring Equinox. Imbolc was a festival for the coming spring, and often featured primitive meteorology in an attempt to predict or control how quickly spring arrived.

As Christianity swept into the British Isles, missionaries incorporated Brigid, the Celtic goddess of Imbolc, into St. Brigid of Kildare, a patron saint of Ireland. Imbolc was replaced with Candlemas, a feast dedicated to St. Brigid that took place every year on Feb. 2.

Candlemas is a religious holiday, but it remained a big day for weather forecasting, too. Tradition held that winter wasn’t over if Candlemas was sunny enough to cast shadows, but a cloudy, shadow-free day meant spring had sprung. According to an old British saying, “If Candlemas Day be bright and clear, there’ll be two winters in the year.”

That may explain the origin of Groundhog Day in general, but it offers few clues on how groundhogs got involved. For that, we can thank 19th-century German immigrants and a creative city editor at the Punxsutawney Spirit newspaper.

Germans who settled in Pennsylvania in the 1800s brought many customs from home, including an old practice of predicting the end of winter based on bears’ and badgers’ hibernation habits. Some Germans may have switched to groundhogs when they arrived in America, but the new tradition didn’t really take off until the late 1880s, when a group of local groundhog hunters caught the attention of Punxsutawney Spirit city editor Clymer H. Freas.

Freas reported on the men’s groundhog hunts and barbecues, touting them as members of “the Punxsutawney Groundhog Club.” He became so enthralled by local groundhog folklore that he went on to promote Punxsutawney as home to a weather-predicting groundhog, a story he then continued to repeat and embellish year after year. Other newspapers began reporting it, too, and Punxsutawney soon became ground zero for groundhog meteorology, as well as the hometown of world-renowned forecaster “Punxsutawney Phil.”

Crowds of 30,000 people now swarm the city to watch Phil make his annual prediction, an event further popularized by the 1993 Bill Murray comedy “Groundhog Day.” The rise of Punxsutawney Phil has also inspired an array of other forecasting groundhogs across the United States and Canada, including Gen. Beauregard Lee in Atlanta, Sir Walter Wally in Raleigh and Wiarton Willie in Ontario.

Although there could be some truth to the link between clear weather on Feb. 2 and a longer winter — since sunny days in winter are often caused by cold, dry air masses, and cloudy days tend to result from moist, mild ocean air — the National Climatic Data Center points out that groundhogs are hardly reliable meteorologists. An NCDC analysis shows “no predictive skill” in Punxsutawney Phil’s winter outlooks since 1988, and a study of Canada’s 13 major weather-forecasting groundhogs found their success rate was about 37 percent over 30 to 40 years.

A better rule of thumb for predicting winter weather is to look at regional climate, according to the NCDC. For most of the United States, the three coldest months of the year are December, January and February, meaning winter is usually still going strong on Feb. 2 regardless of whether rodents cast shadows. But before we accuse the holiday’s namesake forecasters of sleeping on the job, it’s worth noting that wild groundhogs in North America often hibernate into late February and March — suggesting they may know winter isn’t over without even stepping outside on Groundhog Day.

Even aside from dedicating a holiday to it, Americans and Canadians have been very good to the groundhog. The species was relatively scarce when Europeans first settled the continent, but as settlers fragmented forests to set up farms and towns, they created more of groundhogs’ favorite habitat — the edge between open and woodland areas — while also killing wolves, cougars and other top predators. Although groundhogs thrived and expanded their range, however, they still usually try to avoid contact with people.